Rust is a familiar product of the oxidation of iron. Water with acid or salt is an electrolyte. Iron dissolves in the electrolyte and reacts with oxygen, forming iron oxide. Iron oxide is a weaker substance than the original iron, so it crumbles and washes away easily. Iron items may be galvanised or painted to protect them from rusting. 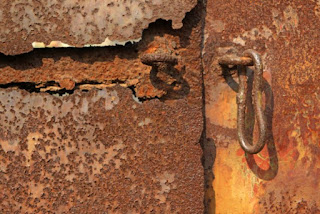 This iron door has begun to crumble due to rust.

Some rock-forming minerals also contain iron. Iron-containing minerals tend to be dark colours, but the oxidised forms are much lighter. This is often seen basalt – a common volcanic rock. Basalt is the main component of lava flows in Hawaii and Iceland, where it weathers to a rusty colour. 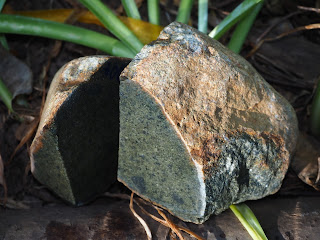 This basalt has been cut to show the difference between the fresh interior and the oxidised outer surface.

The colours of Australia

Australia looks red from space due to oxidation of our ancient rocks. The ancient rocks that make up Australia have weathered over millions of years, without being eroded into the oceans. The iron and aluminium oxides have remained on land and formed the distinctive red centre of Australia and red rocks throughout the continent. 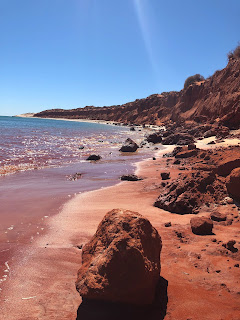