Humans are at the mercy of natural hazards. Predicting hazards and surviving them has always been vitally important. Australian Aboriginal stories of volcanic eruptions are, arguably, the oldest records of natural disasters and have been faithfully repeated for thousands of years. These stories not only describe the volcanic eruption, but also warn people to evacuate the area when warning signs are detected.
More recently, people have developed technologies to record and locate hazards. An example of this is the beautiful seismograph invented by Chinese astronomer Zhang Heng. However, prediction of hazards is difficult and varies with the type of event. 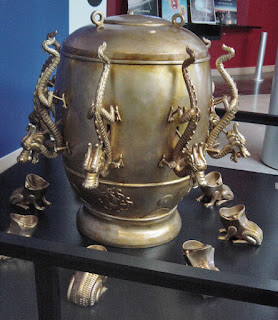 A replica of the instrument invented by astronomer Zhang Heng to warn the Chinese Emperor of earthquakes. Ground movement moves a pendulum inside the jug, pushing a lever that opens a dragon’s mouth. A ball drops out into the mouth of the toad. This indicates not only that an earthquake has occurred, but also the direction of the hazard. (Kowloonese 2004, Wikimedia Creative Commons)


Modern technologies to predict natural disasters
One of the best predictors of geological and weather hazards is historical records. If a disaster has happened in the past, it is likely to occur again. Understanding the risk allows people to minimise damage to lives and property.

Geohazards
Modern seismographs are not as beautiful as that of Zhang Heng, but they are far more compact and accurate. Different patterns and magnitudes of seismic activity provide information about the movement of magma under volcanoes and the spread of seismic waves in earthquakes. Networks of seismometers are vital for predicting volcanic eruptions and recording earthquakes.

Strain meters measure tiny differences in forces affecting Earth’s crust. They can detect movement of magma and strain along fault lines. Strain meters are so sensitive that they can detect changes caused by passing weather fronts!

GPS is useful for monitoring movement along plate and fault boundaries, as well as detecting changes in the shape of a volcano. If GPS monuments are moving closer together, this indicates compression of Earth’s crust. This stored energy could eventually be released in an earthquake. The movement of magma within a volcano can cause swelling which is detected by increased elevation and spreading of GPS monuments.

Gas monitoring is important for prediction of volcanic eruptions. Increases in carbon dioxide and sulfur dioxide indicate the movement of magma and imminent eruptions. Gases can be directly sampled or measured using spectrometers either on the ground or in aircraft. Monitoring of radon gas for earthquake warnings has been proposed but does not offer accurate predictions at this time.

Different types of radar (InSAR and LiDAR) allow scientists to monitor the shape of volcanoes. The resulting images can be used to highlight changes in shape and even to monitor ash emissions.

Weather hazards
Air pressure is a key monitoring technique used to forecast extreme weather events. The interaction of high- and low-pressure systems can create violent storms such as East Coast Lows and tropical cyclones. Pressure is monitored using barometers on land and on ocean vessels.

Doppler radar detects precipitation. It is useful for mapping the progress and intensity of rain and may offer very short-term warning about extreme hail. However, it is not useful for prediction of major hazards. 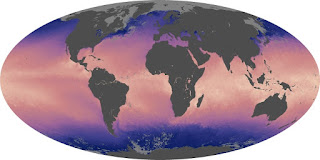 
Protecting people and property
The purpose of hazard prediction is to prevent or minimise damage to people and property. Without disaster planning, prediction is useless and may cause damaging panic. If a warning is issued, people must know how to respond. The Columbian government was warned of the eruption of Nevado del Ruiz volcano in 1983, but no warning was given to the population. The resulting lahars killed more than 23,000 people.

Building codes are vital to prevent loss of life. Earthquake zones need buildings that are reinforced to withstand earth movement. Reinforced structures are also more likely to withstand extreme weather events. Steeply pitched, reinforced roofs are most likely to hold up under ash fall from a volcanic eruption. Placing homes away from areas of potential storm surge, landslide or lahar hazards is just as important as reinforcement of the structure itself.

Disaster planning needs to be undertaken by governments so they can effectively respond to natural hazards through evacuations and prompt restoration of disrupted gas, water and electricity. Emergency services and ordinary citizens must know how to react if a hazard strikes. Japan is a world leader in disaster response and holds an annual Disaster Prevention Day on September 1. Citizens learn how to respond in school and at the workplace. 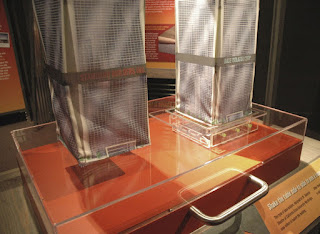 The Lifecycle of Geology in a Civil Engineering Project - Part 2

The Lifecycle of Geology in a Civil Engineering Project (Part 2) Do Civil Engineers need to know any geology? Find out in our latest blog series which walks you through the lifecycle of a project and just why geology is key: Geology for Initial Planning and Scoping Geology for Construction Materials Geology for Foundation Design Geo hazard Identification Impacts of Geology on Construction Geology for Construction Materials (Part 2) Geology is the single most important factor in making and finding construction materials for civil engineering projects. ALL natural construction materials are a function of the geological process that created it. So, what kind of construction materials do we use in a civil project? A lot! Some are described below: General fill material to build up ground levels. Pavement materials for roads and hardstands. Sand fill or aggregate/gravel material for drainage. Clay fill material for impermeable layers like dam embankments and pond cl

The Lifecycle of Geology in a Civil Engineering Project - Part 1