Fossils are evidence of life from the distant past. This means that the bones of a chicken you ate last week are not fossils (not old enough), but the bones of Dromornis (the Demon Duck of Doom) that lived 20,000 years ago are fossils.
Are all fossils dinosaur bones?
Dinosaurs were a fascinating and impressive lineage of animals. However, fossils are much more than dinosaur bones. The most common fossils are the remains of tiny marine creatures – shells and teeth.
There are two general types of fossils: body fossils and trace fossils. A body fossil preserves the remains of an organism. Bones, shells, leaf prints and insects in amber are examples of body fossils. A trace fossil is an indirect sign of life such as footprints, burrows, trails or coprolites (fossil poo). 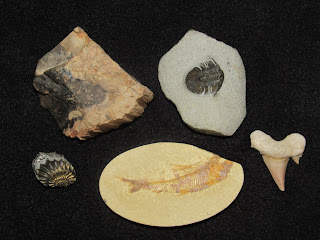 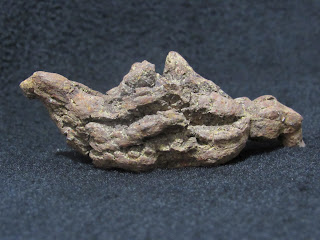 This trace fossil is a coprolite
How do fossils form?
Most organisms that die do not become fossils. In order to be fossilised special conditions must be present. Most commonly, there must be quick burial in fine sediments with little decay. Over time the soft parts of an organism generally decompose, and the sediments turn to rock. When this rock is exposed in the future, we find the fossil.
Permineralisation is the type of fossilisation that occurs when dissolved minerals seep into spaces in the remains and then crystallise. Petrified wood is a common example of this. Sometimes the minerals in the organism’s bone or shell may be replaced by dissolved minerals. This is called replacement.
Moulds and casts may be body or trace fossils. An impression (mould) of a trilobite is a body fossil. A footprint is a trace fossil. The opalised fossils from Lightning Ridge, New South Wales are casts of the original organisms.
Teeth are very tough and are often preserved without replacement, like the shark tooth in the photo above. These are actual remains. Insects trapped in amber are another example of actual remains. The hard exoskeleton remains, but the soft interior has decayed.
Carbonisation occurs when organisms (usually leaves) are buried in sediments and a residue of carbon is left behind. When a huge quantity of leaves are compressed, coal forms. This is why coal is a fossil fuel. We can burn the carbon from plants that lived millions of years ago. 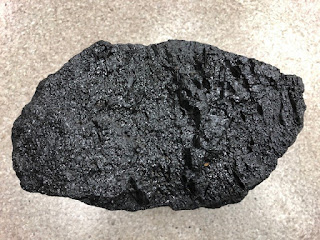 
Explore fossilisation for yourself
You can make your own fossils and investigate different types of fossilisation:
Make moulds and casts with plasticine and plaster of Paris
Make a replica dinosaur egg using sand, salt, coffee grounds and flour
Create trackways in a sandpit
Do fieldwork to spot potential carbonisation and make your own moulds and chocolate fossils by following instructions in the video
Carbonisation Cast Dinosaur Earth and Environmental Science Earth and Space Science EES Fossil Fossilisation M5 Mould Palaeontology Permineralisation Petrified Wood Science
Location: Australia