In the early days of large-scale Australian mining, mine sites were simply abandoned when they were no longer profitable. Fortunately, we have become better stewards of the land and environmental rehabilitation is a vital part of modern mining.
What will it look like after mining?
This is a vital question for today’s miners. Companies must provide detailed plans for rehabilitation and pay a bond before mining begins. The bond covers the cost of rehabilitation by the government if the company were to go broke.
Mining companies consult with the government, community and traditional owners about important sites and future land uses. This informs the rehabilitation plan. Land may be turned into pasture, habitat or recreational areas after mining has finished. There must be a vision of the final outcome before mining starts. 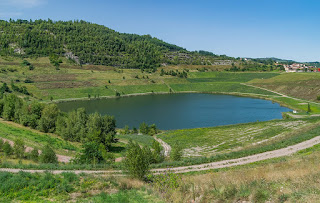 Rehabilitation of the former mine La Découverte in Aveyron France has retained the original benches and the void is a lake (K Golik 2017, Wikimedia Creative Commons)
Video:
Webpages:
Improving marine habitat with oil rigs
Oil rigs are an unlikely hero in marine environments. Whilst oil spills have tragic environmental consequences, oil rigs form artificial reefs and become a valuable habitat. A 2019 review found that fish were even more abundant on rigs than on natural reefs nearby! This is probably because there is less fishing around oil rigs. A 2014 study found that oil platforms off the Californian coast were some of the most productive fish habitats in the world.
People deliberately sink old ships to serve as artificial reefs, so using oil rigs for this purpose is a logical option. There are a variety of ways to re-use the oil rig, some of which are shown in the diagrams below. 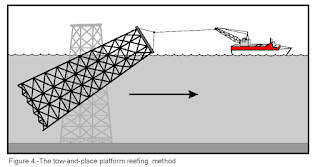 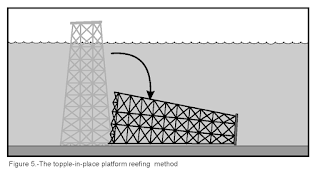 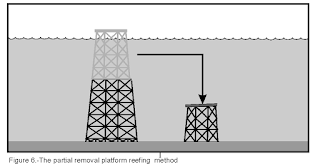 Options for rig-to-reef rehabilitation (L Dauterive 2000. Rigs-to-Reefs, Policy, Progress, and Perspective. US Minerals Management Service, public domain)
Reef construction can more deliberate. BHP partnered with Recfishwest to create King Reef in the Exmouth Gulf, WA. Custom-made concrete structures and pieces of a decommissioned oil rig were placed on an area of barren seafloor. Within a year, the site was teeming with fish.
Video:
Webpages:

Try to rehabilitate your own model mine
You can make a model mine using a pan with sand, soil, marbles and plants. Try your hand at mining the site using a spoon and carrying out progressive rehabilitation. Our video will show you how to do this.
Learn more about Mineral Resources and mining on our ESWA website (head to section 19)