Erosion is the transportation of earth materials, particularly soil, and it is a BIG problem for Australia. Soil erosion is more than 10 times faster than soil formation in Australia. Our coasts suffer erosion from storms and riverbanks are washed away after flooding.
Why is soil erosion such a big deal?
Healthy soil is vital for growing healthy food. According to Australia’s 2016 State of the Environment Report, up to 10 million hectares of land has less than 500 years until the topsoil is completely eroded away. Much of this soil is in fertile growing regions of southern Queensland.
When soil is washed away it makes streams cloudy so that it is difficult for water plants to grow and clogs the gills of water animals. Soil being blown away pollutes the air, making it difficult for animals to breathe and coating the leaves of plants where it lands. 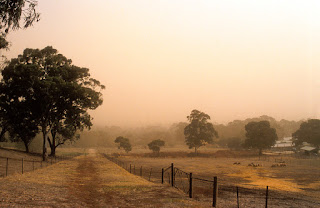 Topsoil is blown away in this dust storm on the outskirts of Adelaide (R Merry 1994, CSIRO Science Image)
Webpage:


Farming for healthy soil
In order to protect valuable topsoil and keep the land productive, many Australian farmers have adopted minimal tillage. This means that they leave the stubble of a crop on the field instead of ploughing the remnants into the soil. Minimal tillage helps keep water and organic material in the soil, as well as protecting it from wind and water erosion. New crops are sewn in the stubble of the previous crop.
Ploughing the soil helped to control weeds. Now that they don’t plough, farmers use herbicide to control weeds. Colour-seeking technology can detect green weeds growing among brown stubble. Herbicide is only applied to the weed, reducing the amount needed. 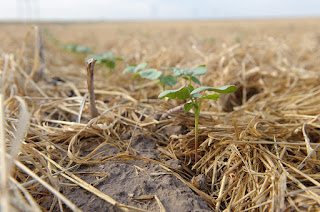 
Preventing erosion in the city
The large amount of pavement and buildings in cities means there is less soil exposed to absorb water. After rain, there is a huge amount of runoff that flows into the stormwater system. Stormwater empties into local streams. After a big rain, the huge volume of stormwater rushing down the streams carves away at the banks. Some strategies used to prevent this include paving stormwater drainage areas and planting trees along streams to help hold the soil together.
Hillsides, construction sites and places where many people walk are also at a high risk for erosion. Look around your local area. Can you see places where there is mulch or tree planting to reduce erosion? Have you ever noticed hay bales around construction sites? These are all ways of stopping soil from being washed away. 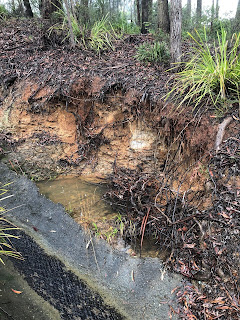 Stormwater has carved away a large portion of this hillside, exposing tree roots
Explore erosion at home
Observe erosion and see if you can prevent it using soil, pans, mulch, plants and a watering can (check out the video here). Or adapt your experiment to look at the impact of wind too.
Sculpt some sand dunes using sand and straws.
Try out erosion control using sand, vegetation, a bucket and a watering can.
Investigate an area that has been changed by erosion.