Fossils are evidence of life from the distant past. Most people know that fossils allow us to see what ancient organisms looked like, but there is much more that we can learn. Fossils can tell us about the process of evolution, the movement of continents, past environments and the behaviour of organisms that have been extinct for millions of years.

Stratigraphy and relative dating
Stratigraphy is the study of layers of rock (strata). Relative dating is telling the relative age of a rock by its position.
For example, you know that the rock at the bottom is relatively older than that at the top of a cliff. This is explained by the Law of Superposition. It sounds grand, but superposition just means that in an undisturbed sequence of sedimentary rocks younger layers are on top. Sometimes rock layers get lifted up or folded over by tectonic processes. Geologists can spot this by comparing the layers in several locations and using fossils to match up the same time period.
Scientists use index fossils to help match rocks in different locations. These are organisms that lived in many places and are common as fossils. Species only live for a limited time before becoming extinct, so rocks with the same fossil were generally deposited during the lifetime of that species. Conodonts are a particularly useful index fossil shown in the photo below and discussed in the video below “The Most Useful Fossils in the World.” 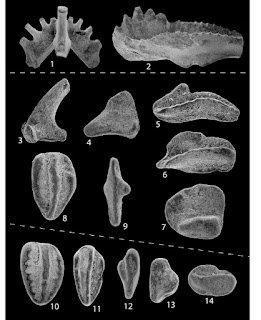 
Fossils and past environments
Due to a difficult expedition, Antarctic explorer Robert Scott and his men got rid of everything extra on their way back from the South Pole except Glossopteris fossils from the Beardmore Glacier. Why did they keep these lumps of rock when they were in dire straits? They knew the fossils suggested that Antarctica was once covered in temperate rainforests. The environment had radically changed over time. This supported Wegener’s theory of continental drift at a time when the idea of moving continents was very controversial. 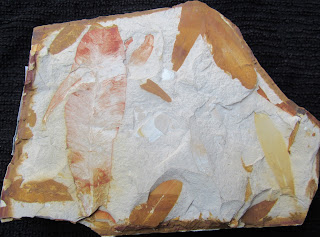 Glossopteris fossils are found throughout the Southern hemisphere. These fossils indicate that the environment was once a cool rainforest.
Stromatolites are fossils of ancient colonies of bacteria that lived billions of years ago in shallow seas. Living colonies of stromatolite-forming bacteria are found in a few places in the world, including in Shark Bay, WA. The fossils are found throughout Western Australia in dry inland areas. These fossils show us that areas that are now dry were once seas. 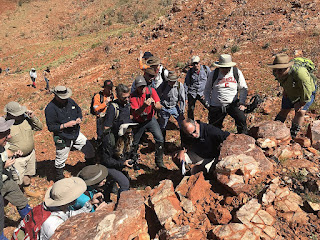 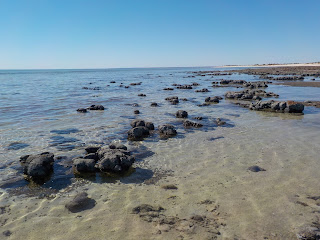 
Behaviour preserved in rock
Most fossils are fragments of bone, tooth or shell. However, trace fossils such as ‘trackways’ help to preserve evidence of behaviour. The Lark Quarry in Queensland has footprints showing a stampede of little dinosaurs panicking and running on the shore of a shallow lake. Footprints of a big carnivorous dinosaur show that they may have been running for their lives. 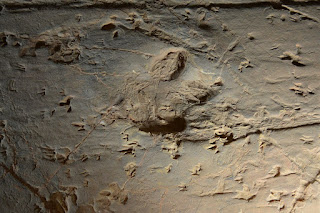 The Lark Quarry dinosaur trackway. (P Murphy 2018, Wikimedia Creative Commons)
A fossil dinosaur nest from India had eggs of sauropod dinosaurs and bones of a large snake wrapped around a crushed egg. This amazing fossil not only tells scientists that the dinosaurs laid eggs in a neat nest, but also indicates that snakes preyed upon the hatchlings. 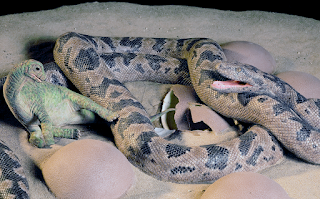 Reconstruction of a snake feeding on hatchling sauropod dinosaurs. (Benton MJ (2010) Studying Function and Behavior in the FossilRecord. PLoS Biol 8(3): e1000321. Creative Commons)
Scientists reconstruct the muscles of animals based on their bones, using modern animals for comparison. These reconstructions can be combined with footprints to give us a good idea of how animals walked and how fast they could run. Less spectacular fossils can also provide evidence of animal behaviour. Teeth can indicate the diet of an animal. Coprolites (fossil dung) can show what animals ate and how well they digested it. 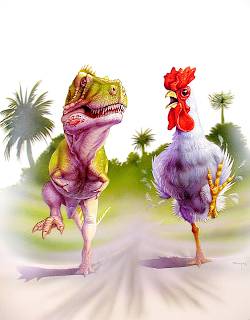