Rocks can tell us a lot about the history of an area by their composition, shape, texture and arrangement. In this installment of Reading Rocks, we will learn how to read the tectonic history written in rocks.
Pushing, pulling and sliding
Earth’s tectonic plates move at about the same speed as your fingernails grow. We don’t usually notice this movement, but over millions of years the continents are rearranged, mountains and valleys form, oceans appear and disappear. The story of these huge changes can be seen in rocks.
When rocks are pushed or pulled by tectonic forces they bend, stretch and break. The breaks are called faults. By looking at a fault, we can tell what forces caused the break. This indicates the type of plate boundary or local forces that were acting on the rock. Road cuttings and cliffs are good places to look for faults. 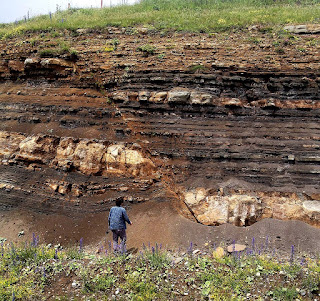 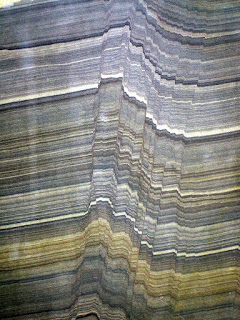 
Landforms at plate boundaries
You can spot faults in a cross section of rock, but major landforms also tell us about tectonic interactions. Jagged mountains are formed by continental collisions, whilst rift valleys form as continents are pulled apart. 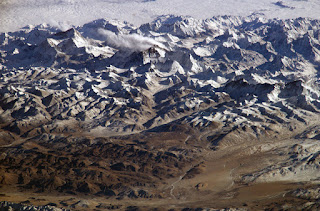 The Himalayas, seen here from the International Space Station, were formed when the Indian subcontinent collided with the Eurasian plate. (NASA 2004, Public domain) 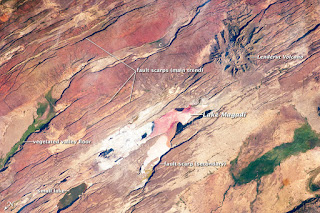 East African Rift, seen from the International Space Station, is being formed as the African and Somalian plates move away from each other. (NASA 2012, Public domain)
Modelling plate boundaries at home
How can we model tectonic forces and see their effects? You can try this at home in several ways.
Make foam blocks to investigate plate tectonics.
Model forces using a Mars Bar and eat your work afterwards.
Build a model using a plastic container, sand, soil and cardboard. Watch the video to learn how to build this model.