Elastic rocks
Professor Henry Fielding Reid noticed that the ground surface had moved after the 1906 earthquake. He concluded that the earthquake had released previously stored elastic stress. You may have experienced a sudden elastic rebound if you stretched a rubber band and it broke. Subsequent research has supported Reid’s theory, that most earthquakes are the result of the sudden rebound of stored energy.
Geologists monitor the deformation of large areas of rock using GPS monuments and observing their movement over time. If monuments are getting closer together, the rock is being compressed. If monuments are moving apart, the rock is being stretched. Either of these forces could eventually result in a sudden movement along a fault – an earthquake.

Forces within the Earth gradually bend rocks which then snap when they can no longer hold more energy. (from Tompkins and Watkins (2016) Exploring Earth and Environmental Science: Year 12.)
Video:


Measuring earthquakes
The Mercalli Scale was invented in 1902 to express how people experience an earthquake. The Modified Mercalli Scale developed in 1931 is still used to describe the effect on people. Intensity is expressed in Roman numerals and reflects the damage or experience. For example, magnitude II is weak, felt only by a few people at rest; whereas magnitude VII is very strong, causing considerable damage to poorly built structures. Although structural engineers can rate higher levels on the Modified Mercalli Scale, lower levels are a matter of opinion and there is often great disagreement between people in the same area. 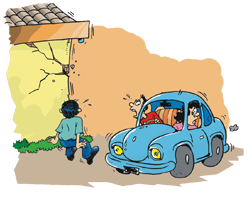 A Mercalli level VII earthquake causes slight to moderate damage in well-built ordinary buildings and leads to widespread fright. (E Wardoyo, Government of Indonesia, public domain)
The Richter Scale was developed in 1934 and is based on the amplitude (height) of the largest wave recorded on a seismometer and the distance between the earthquake and the seismometer. It was developed for southern Californian earthquakes. Other scales had to be calibrated with the Richter scale, taking into account local rock properties. The Richter Scale is logarithmic – a one unit increase in magnitude represents a 10x increase in the amplitude of waves. The Richter scale is now referred to as the Local Magnitude and is not accurate for very large earthquakes (8+).

The amplitude recorded on a seismograph varies with the underlying geology. This means that each seismograph reading must be calibrated to reflect local geology for the Richter Scale. (Loma Prieta earthquake readings, USGS, public domain)
The Moment Magnitude Scale is used by seismologists because it measures the amount of energy released in an earthquake, based on the area of rupture, distance of movement and properties of the rock involved. The Moment Magnitude Scale was created to match the Richter scale for smaller events. An increase of one unit on the scale represents 32x the energy released. This means that there is a great difference between a 7.1 and a 7.2 earthquake, even though the numbers are very similar. 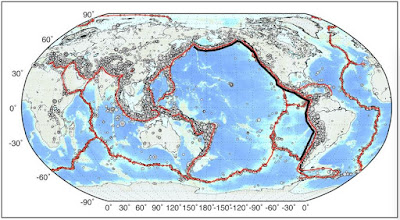 An earthquake with a Moment Magnitude of 10 would require a fault 14,000 km long, as shown in black on the map. (USGS, public domain)
Video: