Bathymetry is the study of seafloor features. Many bathymetric maps contain only basic details and large areas of the oceans remain poorly mapped.

First map of the ocean floor
When Alfred Wegener came up with his theory of continental drift, no one knew what lay beneath the waves. Some harbours had been mapped, but the vast oceans remained unexplored. Sonar (SOund NAvigation and Ranging) technology allowed people to measure the depth of oceans. With the help of improved sonar developed in World War II, the mapping began.

Compiling hundreds of thousands of data points from hundreds of ocean voyages was a daunting task, before the advent of modern computing. In 1957, Heezen and Tharp published the first map of the seafloor that allowed the public to visualise the floor of the North Atlantic. Early maps like these were vital to the modern theory of plate tectonics. They showed the locations of mid-ocean ridges, deep trenches and submerged volcanic arcs. People could finally see how the oceans grow and where plates subduct. 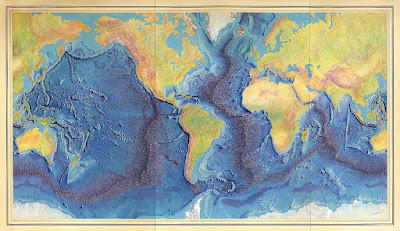 This painting of the mid-ocean ridges is based on the scientific mapping of Marie Tharp and Bruce Heezen (H Berann 1977, public domain)
Video:


Why bother with bathymetry?
The stunning maps created by Tharp and Heezen give the impression that the ocean depths have been adequately mapped. However, this is not the case. We have more detailed maps of the Moon, Mars and Venus, than of the seafloor.

The largest structures (e.g. mid-ocean ridges) have been mapped, but there is still much to be learnt. This was highlighted in 2014, when flight MH370 was presumably lost in the southern Indian Ocean. Detailed bathymetric surveys were made of areas off Western Australia and scientists discovered that the seafloor was much more rugged than previously thought. They found many new hills and mountains, as well as four times more seamounts than previously mapped. The new features aid our understanding of seafloor spreading and highlight areas of potential biodiversity.

Seabed 2030
In 2017, the Seabed 2030 project was launched. The project is an international effort coordinated by General Bathymetric Chart of the Oceans (Gebco). This map will be a tool for management and conservation, disaster planning, scientific understanding and resource extraction.

The organisation is encouraging all ocean-going vessels, from cargo ships to recreational vessels, to transmit their sonar data in real time to the British Oceanographic Data Centre. The Centre is coordinating the mapping effort and allowing access to the data. Marine enthusiasts can propose names for underwater features by writing to the International Hydrographic Organisation in Monaco. 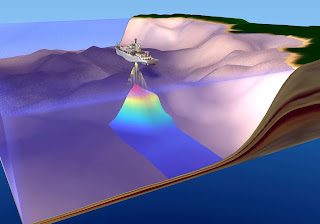 
Explore the ocean depths from home