Metamorphic rocks are the changelings of geology. Any rock type will be metamorphosed if it is subject to high temperatures and pressures. Metamorphosis changes the minerals and texture of rock. If temperature and pressure become too great, rock melts and, if cooled, becomes igneous.

Regional metamorphism (heat and pressure)
Pressure from tectonic plates converging can cause large regions of rock to undergo metamorphism. In mountain ranges like the Andes and Himalayas, rocks are both metamorphosed and folded by tectonic forces over many kilometres. The heat and pressure of the collision rearrange minerals to align perpendicular to the forces. This results in a striped, sheet-like structure known as foliation.
At lower temperatures and pressures, fine-grained rocks such as shale or mudstone are often metamorphosed to slate. Slate fractures easily along its foliation and can be used to make blackboards, roof tiles and floor tiles. When slate is subject to further heat and pressure, it develops progressively larger crystals until it becomes gneiss (pronounced “nice”). 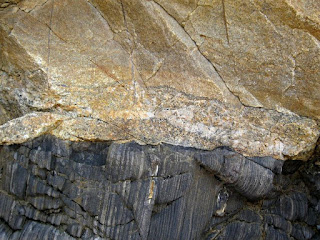 Which way did it form?
Limestone metamorphoses to marble in both regional and contact metamorphism. The calcite crystals grow larger and interlock, but do not form foliation layers. To determine the method of marble formation, you must examine the surrounding area for igneous intrusions (contact metamorphism) or foliated metamorphic rocks (regional metamorphism). Marble is a useful stone that is used for buildings, statues and decorative items. It is even found in many toothpaste formulas! 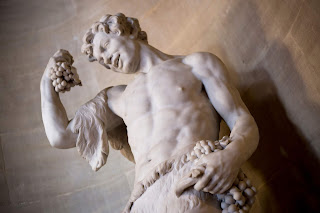 Marble has been used for sculpture for thousands of years.

Quartzite tools
Quartzite is metamorphosed sandstone. It is extremely tough and, when broken, will fracture through quartz grains. It is also very dangerous to work with because it is so hard. A hammer will often bounce off quartzite and shards are sharp and dangerous. It takes great skill to make spear tips, cutting tools and arrowheads from quartzite. People around the world have used quartzite for tools for thousands of years. Aboriginal peoples across the north coast used quartzite or silcrete to produce sharp spear tips and knives. Their distinctive tools are known as leilira blades. 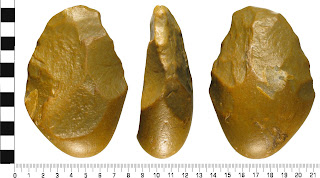 This quartzite handaxe found in Derbyshire, England, was made 800,000 – 40,000 years ago. (The Portable Antiquities Scheme/The Trustees of the British Museum, Wikimedia Creative Commons)

Metasomatism and mineral deposits
Metamorphism rearranges existing mineral within a rock. Rocks may lose water or carbon dioxide during metamorphism, but nothing is added. Metasomatism is a different process – hot water moves through rock. The hydrothermal solution acts as a solvent, transporting and adding minerals. This process is important for mineral deposits because the fluids often concentrate economic minerals, such as gold. Hydrothermal gold vein deposits are mined throughout Australia. One example is the Eastern Goldfields area around Kalgoorlie. 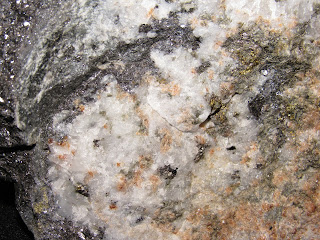 Bathymetry is the study of seafloor features. Many bathymetric maps contain only basic details and large areas of the oceans remain poorly mapped.
First map of the ocean floor When Alfred Wegener came up with his theory of continental drift, no one knew what lay beneath the waves. Some harbours had been mapped, but the vast oceans remained unexplored. Sonar (SOund NAvigation and Ranging) technology allowed people to measure the depth of oceans. With the help of improved sonar developed in World War II, the mapping began.
Compiling hundreds of thousands of data points from hundreds of ocean voyages was a daunting task, before the advent of modern computing. In 1957, Heezen and Tharp published the first map of the seafloor that allowed the public to visualise the floor of the North Atlantic. Early maps like these were vital to the modern theory of plate tectonics. They showed the locations of mid-ocean ridges, deep trenches and submerged volcanic arcs. People could finally see how the oce…