Aboriginal and Torres Strait Islander peoples have been managing Australian natural resources for more than 60,000 years. The diversity of peoples and landscapes has led to a huge range of techniques appropriate to local areas. We will look at a few of the practices in the area that is now New South Wales. 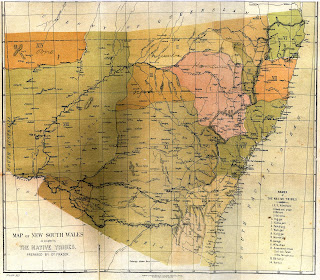 Map of the Aboriginal tribes of New South Wales by John Fraser, published in an Australian Language in 1892 (public domain)

Burning for biodiversity and resilient landscapes
Cultural burning has been used by Aboriginal peoples across Australia to manage land and increase biodiversity. Small, controlled fires are set based upon deep knowledge of the local area and its response to fire. Fire helps rejuvenate local plants and benefits wildlife. Fire may also be used to clear important pathways and for fuel reduction.
After tens of thousands of years of fire management, many Australian plants and animals are adapted to fire. After fire, grass trees (Xanthorrhoea) flower, Banksia and Hakea species release their seeds and other plants sprout from underground roots. Animals respond to the different opportunities provided by recent burning. Kangaroos prefer the fresh grass that quickly sprouts after a burn, whereas other animals prefer successional vegetation that grows a few years after fire. 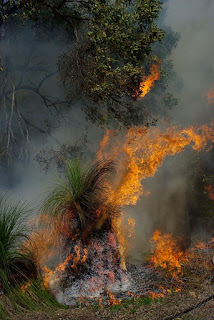 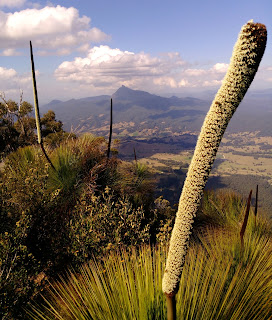 Xanthorrhoea flowering (Jody Oz 2017, Wikimedia Creative Commons)
Aboriginal knowledge of Country is vital for fire management. Small fires set at different times create a diverse patchwork of habitats. Weeds may be controlled with more intense burning, whist some patches may be managed with infrequent, cooler fires. Managers working on Country consider the lifecycles of plants and animals in their decisions.
One example of cultural burning is in the Tathra area. The Bega Local Aboriginal Land Council conducted a cultural burn in 2017. A large bushfire in 2018 devastated areas that had experienced standard hazard reduction burns, but not the area that had been treated with cultural burning. Hazard reduction burns aim to reduce fuel load, whereas cultural burning focuses on the type of regrowth after burning and maintaining soil moisture.

Working with other land managers
There are a variety of formal and informal ways that Aboriginal and Torres Strait Islander peoples engage in land management. Indigenous Protected Areas (IPAs) represent nearly 44% of the National Reserve System, covering more than 67 million hectares of land and sea in 76 dedicated IPAs. Funding and employment are provided for traditional owners to care for Country and Place. Examples from NSW include urban and rural areas such as: 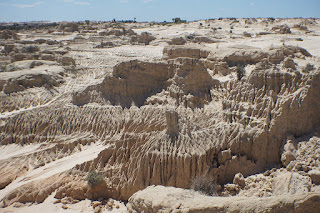 Lake Mungo National Park is part of the Willandra Lakes World Heritage Area. Lake Mungo is the site of the oldest documented cremation (Mungo Lady 40,000 years ago) and contains many Aboriginal artefacts and remains. (RK Jolley 2017, Wikipedia Creative Commons)
The NSW Department of Planning, Industry and Environment (DPIE) has three main formats for working with Aboriginal communities to manages parks and reserves.


All types of agreement allow traditional owners to engage in management of Country, working alongside the NSW Government and other stakeholders. The relative role of each group changes with the type of ownership and individual negotiations. The Gundungurra ILUA covers nearly 7,000 km2 south west of Sydney, including some of the Blue Mountains World Heritage Area. Gundungurra organisations have greater input into management of the lands in order to protect Aboriginal heritage and allow traditional owners to participate in cultural activities.

Bathymetry is the study of seafloor features. Many bathymetric maps contain only basic details and large areas of the oceans remain poorly mapped.
First map of the ocean floor When Alfred Wegener came up with his theory of continental drift, no one knew what lay beneath the waves. Some harbours had been mapped, but the vast oceans remained unexplored. Sonar (SOund NAvigation and Ranging) technology allowed people to measure the depth of oceans. With the help of improved sonar developed in World War II, the mapping began.
Compiling hundreds of thousands of data points from hundreds of ocean voyages was a daunting task, before the advent of modern computing. In 1957, Heezen and Tharp published the first map of the seafloor that allowed the public to visualise the floor of the North Atlantic. Early maps like these were vital to the modern theory of plate tectonics. They showed the locations of mid-ocean ridges, deep trenches and submerged volcanic arcs. People could finally see how the oce…