Australia’s Most Unwanted
The most unwanted invader in Australia is the European rabbit. Originally introduced for sport hunting, rabbits quickly spread across the continent. They dig burrows, causing erosion. The eroded sediments run into waterways and decrease water quality. Rabbits eat every part of the plant, including the root system. This endangers plants and native animals that are competing with rabbits for food. High numbers of rabbits cause a boom in predator numbers, adding to the danger for native herbivores. Rabbits impact more than 300 threatened native species.

The root rot fungus Phytophthora is the second most damaging introduced species in Australia. The fungus attacks plant roots and affects more than 200 threatened native species, as well as important agricultural crops. Phytophthora was accidentally introduced to Australia by contaminated soil on plants or machinery.

Feral pigs edge out cats for the third most unwanted spot. Pigs cause abiotic damage to soil and waterways as they dig. They eat crops and animals, destroy fences and even dig up and eat sea turtle eggs. Cats are a close fourth place because their efficient hunting is a grave danger to native mammals, birds and reptiles. Unlike pigs and rabbits, cats have little effect on the abiotic environment. 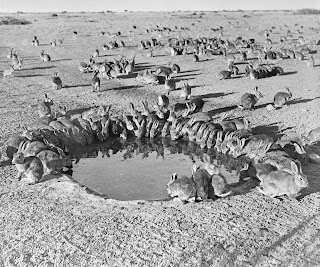 Rabbits around a water hole on Wardang Island. Rabbits have eaten nearly all of the vegetation in the area. (WM Mules 1938, CSIRO Science Image)
Video:
Warning – images of dead and injured animals in both videos

Thirty-two weeds are so dangerous that they have been declared Weeds of National Significance (WoNS). Government agencies have developed management plans for the WoNS and a range of stakeholders (land owners, landcare groups, local government, agriculture authorities, etc) take part in eradication campaigns for plants such as alligator weed, asparagus weeds, broom and prickly pears. 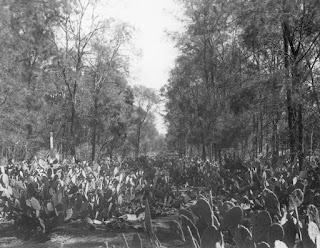 
Different people, different opinions
Different people have different opinions about how to manage introduced species. Feral horses (brumbies) are viewed as an ecological menace. They were part of Australia’s European heritage and were used as companions by different groups of people. Goats were once seen as purely a pest but are now viewed as an asset by landowners who round them up and sell the meat. Even the ugly cane toad finds its fans from people who enjoy watching the tough toads hop around suburban gardens.

Aboriginal Australians are generally pragmatic in their approach to introduced species, eating those that are tasty and managing those that are troublesome. For example, the Yellomundee Aboriginal Bushcare group works with NSW National Parks and Wildlife to manage African Lovegrass and Lantana using cultural burning methods. The Alinytjara Wilurara Natural Resource Management Board works with the South Australian Government to manage feral camels and horses by mustering and selling these animals. This program also trains members of the local Aboriginal community in stock handling and animal management. 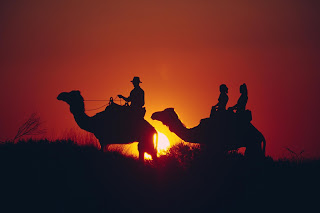 Feral camels can be rounded up and used for riding, milking or meat.
Video: