Water is essential for life and there are many ways to source it. The water we source is not always clean enough for drinking or other uses so it must be treated in various ways before use to make it safe.

Water sources
When European settlers first arrived, they sourced fresh water from rivers, creeks and natural springs that were accessible from the surface. As time passed and the population of Australia increased, these sources became less viable due to their size or proximity to consumers. This led to infrastructure, such as dams and pipelines, being constructed to collect and distribute rainfall and runoff from the surrounding land. 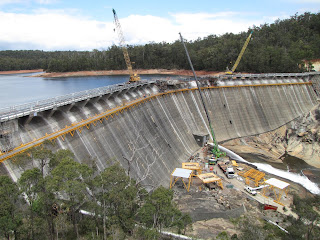 Wellington Dam, WA (Image: Calistemon, Wikipedia Commons)
Increasingly, rainfall also became a less reliable source of water as the demand for water increased. The search for other sources, led to the extraction of groundwater. A series of PALMS classroom activities examining water contained within aquifers can be found here and the supporting student worksheets found here.
Today, water is obtained from a variety of sources. For example, in Perth, Western Australia, the water supply comes from four main sources – dams, groundwater, desalination and groundwater replenishment. The graph below shows how Perth’s water sources have changed since the 1960’s to cope with higher demand and a changing climate, resulting in less rainfall.  In the early 2000’s, the adoption of new concepts, such as desalination and groundwater replenishment, has provided different water sources. Groundwater replenishment recharges aquifers with wastewater treated to drinking water standards. You can find out more about this process here. 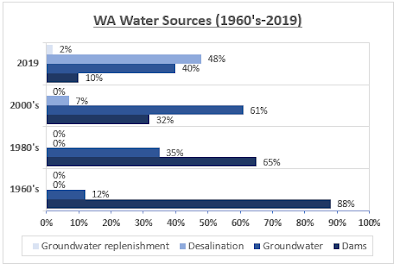 Data source: Water Corporation WA
Most water sources will not immediately supply water that is safe enough for human use so it must undergo some form of treatment before being distributed for consumption. Some of these water treatments are described below.

Settling and Filtration
The very simple methods of settling and filtration can easily remove larger particles from water. Advances in filtration technology have meant that increasingly smaller particles can now be filtered out also.
Settling involves leaving water to sit for extended periods of time to allow denser solid particles to sink to the bottom. The cleaner water remaining at the top can then be decanted off (small scale process) or pumped away (larger scale process). In large scale water treatment plants, the settling process is often aided by chemicals, such as flocculants, and is carried out in large tanks or ponds.
Filtration is the separation of solids from liquid using a barrier that allows (for the most part) only the liquid to pass through. There are many different kinds of filters used for filtering different substances. This technique can be used at a small or large scale. For example, people may use water jugs containing activated carbon filters in their homes and larger scale versions of these cartridges may be used in water treatment plants supplying cities. 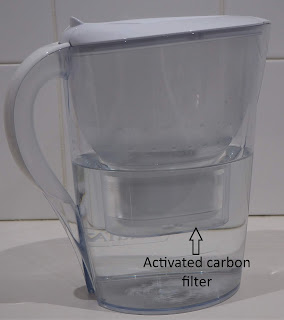 Filter jug containing activated carbon filter
You can make simple filters using equipment found at home. Watch the PALMS Water Treatment video to find out how. The supporting PALMS teacher notes on settling can be found here and notes on filtration can be found here.

Chlorination
Chlorine or chlorine-containing compounds are added to water to eliminate some microorganisms and bacteria, to help prevent the spread of water-borne diseases. This technique has been used to clean drinking water sources for more than a hundred years. As chlorine is toxic at high levels, the addition of chlorine to drinking water supplies must be carefully managed.

Ultraviolet light
Treating water with ultraviolet (UV) light is an alternate technique to adding chlorine to sterilise water, killing some microorganisms and bacteria. As the UV light can be scattered by particles, water must be well filtered to make to make this technique effective. UV light treatment of water can be applied on a small scale at home. UV treatment is not commonly used on a larger scale as it is more expensive than chlorination.

Desalination
Desalination of water is the process that removes minerals, predominantly salt, from seawater to produce fresh water. Most desalination is carried out using a process called reverse osmosis and many countries, including Australia and Kuwait, have adopted this technology to boost fresh water supply.
Western Australia, South Australia, Queensland, Victoria and New South Wales all operate reverse osmosis desalination plants as part of their fresh water supply schemes. Whilst a downside of this technology is the high cost and energy requirements, it is often the most viable option available. Some desalination plants are using renewable energy technologies or energy generated by the desalination process to try and combat this problem.
Reverse osmosis involves pushing a liquid through a very fine membrane filter using pressure. The membrane is so fine that it only allows molecules of a certain size to pass through. In a desalination plant, the membrane allows water molecules to pass through but not salt molecules so seawater that passes through the membrane is cleaned to become freshwater. This SA Water Corp video explains how the Adelaide Desalination Plant runs using reverse osmosis. 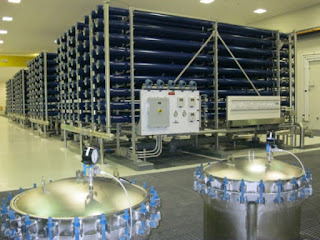 Banks of reverse osmosis membranes at a desalination plant (Image: Twhair, Wikipedia Commons)
More information
This blog post has outlined just a few different water treatment techniques that may be used to make water safe for human use.
If you would like to find out some more information, try one of the following web pages:

Introduced species are those that have arrived in Australia with the help of humans. Species may be introduced for companionship, agriculture or landscaping. Many have a relatively minor effect on the Australian environment, but some introduced species endanger Australian ecosystems and primary production. Introduced species can affect the abiotic (non-living) or biotic (living) components of the environment. The most damaging species affect both. Australia’s Most Unwanted The most unwanted invader in Australia is the European rabbit. Originally introduced for sport hunting, rabbits quickly spread across the continent. They dig burrows, causing erosion. The eroded sediments run into waterways and decrease water quality. Rabbits eat every part of the plant, including the root system. This endangers plants and native animals that are competing with rabbits for food. High numbers of rabbits cause a boom in predator numbers, adding to the danger for native herbivores. Rabbits imp

Zircon crystals survive the processes of erosion, transport and metamorphism, preserving a record of the geological past. They truly last forever! Oldest minerals in the solar system The chemical formula for zircon is ZrSiO 4 . Zirconium (Zr) atoms are occasionally replaced by uranium (U) as the mineral forms. Uranium decays to lead (Pb) over time. By examining the ratio of uranium to lead, scientists can determine how old the zircon crystal is. Although both uranium and lead are present in lava, only uranium fits into the zircon structure. Over time, some of the uranium decays to lead. (KelvinW 344 2010, public domain)   The oldest zircons on Earth are found in the Jack Hills of Western Australia. Many of these zircons are 4.0 billion years old, but the oldest of them all is dated at 4.4 billion years. Zircons are found on meteorites, too. A zircon from a meteorite discovered in Morocco was dated at 4.47 billion years. Dates from Earth and meteorites help us to determine the ag