Aboriginal peoples have used Australia’s resources for at least 60,000 years. Trees have been important sources of materials and landmarks. Scarred trees connect Aboriginal people with their past, but how can you tell if a scar on a tree is a cultural mark or a natural feature?

Significance of scarred trees
When trees are injured and bark stripped from them, they form a scar where the inner layer of wood has been damaged. Wood alongside the scar may overgrow and form a distinctive rim. Aboriginal peoples in southern and eastern Australia used bark to make many useful objects like coolamons or canoes. Trees were also scarred in the production of climbing footholds or extracting food (honey, eggs, possums). Early European settlers removed tree bark to use in weather-proofing buildings.

Cultural scar trees are generally well over 100 years old. The host trees are aging and dying, being replaced by younger trees. This makes scar trees an important link to the past for traditional owners on Country. Some scar trees are also important markers for songlines. You can see many examples of scar trees from New South Wales on the scar tree website. 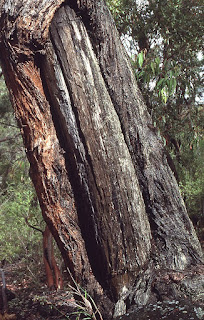 This tree in the Heathcote National Park features a scar from making a shield (Sardaka 1985, Creative Commons)

Spotting a scar tree
Trees scarred by natural processes are becoming more common, but there are distinctive signs that allow you to identify scars caused by bark harvesting. Scars positioned on a bend in the tree may indicate were bark was used as canoes or containers, as the bark was pre-bent into a desirable shape. If a scar is more than three metres in length, the bark was used for making a canoe. Trees with three or more scars are invariably Aboriginal scar trees. River red gum bark was favoured by Aboriginal people and rarely used by Europeans. 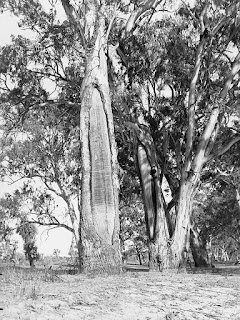 Preserving a scar tree
Due to their significance to local Aboriginal people, efforts must be made to preserve scar trees. One example of this is a scar tree identified at the site of Newcrest Mining’s Cadia mine in 2007. The tree was located on the bank of a tailings dam and was showing evidence of ill health. Newcrest Mining consulted with tree surgeons and the Orange Local Aboriginal Land Council about relocating and preserving the tree.

After consultation and local council approval, it was agreed that the trunk of the tree would be preserved. The tree roots were excavated and a crane used to place the trunk onto a truck for transport to the Cadia District Heritage Area. The trunk was propped into an upright position and concreted in place. Signage in and the associated booklet for the historical precinct explain the significance of the tree and reasons for its preservation. 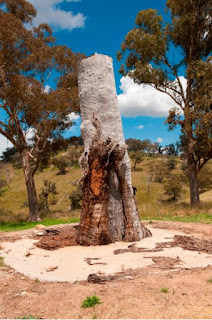