The next mission to Mars will be sending a geologist (of sorts) to look for further evidence of life on the Red Planet. The Mars 2020 mission plans to send a rover, very similar to the highly successful Curiosity Rover, with instruments designed to sample rocks for study of their chemistry and composition. 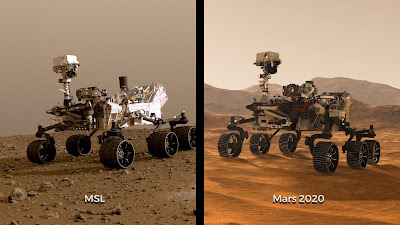 The Perseverance Rover will seek signs of life for the Mars 2020 mission. It is very similar to the MSL Curiosity Rover. (NASA, Jet Propulsion Laboratory, accessed 24/07/2020)
The two main objectives of the mission are to seek signs of life and prepare samples which can be stored. The samples will be analysed using equipment that is calibrated on the spot using a piece of Mars that landed on Earth (as part of a meteorite) some 600,000 years ago (find out more about this rock heading home)!
In a future mission the stored samples can then be collected and returned to Earth for further analysis. The rover will have lots of instruments to help it with its mission. These include cameras which will enable it to study the rocks up close and send the images back to mission control on Earth. Scientists can then decide if they want to conduct further testing of the rocks and soil. The rover has an arm with a drill attached which will drill into rock to collect samples. The aim is to collect at least 20 samples, although there is equipment and space on the rover to store up to 43 samples. The samples will be deposited on the surface of Mars at a well-documented location for future collection and return to Earth. 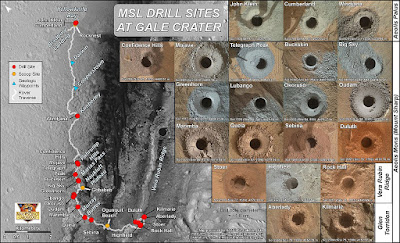 
The most challenging part of the mission will be to get the rover to Mars safely. Mars exploration “began” in 1960 although the first few missions were unsuccessful. In fact, throughout the history of Martian exploration more than 50% of the missions have failed (find out more about the history of Mars exploration here). The Mars 2020 team hope that if the entry, descent and landing process are similar to the landing of the Curiosity it will be a successful mission. There have even been new technologies developed to improve the landing. This involves taking photos during descent to monitor the ground surface, and using thrusters to divert it, if necessary. 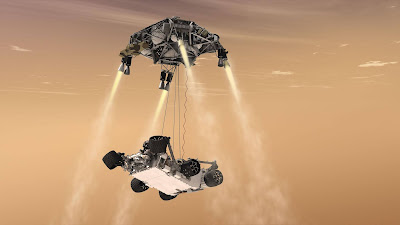 This is an artist’s concept of the power assisted descent used to safely land Curiosity on Mars. (NASA, Jet Propulsion Laboratory, accessed 24/07/2020)
The capsule, in which the rover is encased, will enter the thin Martian atmosphere which is still dense enough to induce temperatures of 2,100°C. The highly effective heat shield should protect the rover inside, so that it only reaches around 10°C.
The atmospheric friction will help to slow descent down, although at 23 km above the Martian surface the capsule is predicted to still be descending at around 1,000 miles per hour! To slow it down further, a parachute is deployed at around 11 km above the surface. This reduces the descent down to around 9 % of its original speed and is therefore a vital step in safe landing.
Eventually, the heat shield pops off, which allows the instruments to detect the ground below. This is where the Mars 2020 mission technology will kick in and a powered descent will (hopefully) ensure the rover lands gently on a suitable spot.


For those of us that have been curious about alien life since childhood, this mission is really exciting! It may give us clues to what else might be out there and answer the question “Are/were we alone?”  It may also provide us more information about life on our own planet and how life may have originated. This mission, and its findings, will most certainly be an interesting one to watch.

Determining the densities of rocks has many different applications, from selecting building materials to finding out about the interior of the Earth.   Determining densities can also help to provide information about particular rock types.   This video shows four simple methods you can use to determine the densities of different rock types.   The densities of rocks depend on numerous factors including the texture and mineral content.   Sedimentary rocks tend to be less dense than metamorphic and igneous rocks, as they are more porous. The porosity of a sedimentary rock can vary depending on the sediment size and shape.   Fine sediment will compact more easily than course sediment. For example, mudstone is generally denser and less porous than sandstone. Round grains will also create more pore spaces, whereas platy minerals like kaolinite can stack like Lego pieces reducing the pore spaces. The amount of cement between the grains is one of the most important factors determine the

Earth materials are vital to our modern life but how do we find them? The exploration process is much more efficient with the aid of technology. Historical prospecting Before modern geology, people found resources such as coal in exposed rocks. An example of this is Awabakal people in the Newcastle area who used coal that was accessible from coastal cliffs. Geological exploration did not exist as a discipline. Resource finds were often a matter of good luck rather than scientific investigation. Gold is an example of a resource sometimes found in placer deposits. Weathering releases gold from rock and it is carried by gravity or water to a deposition point – often a bend in a stream. Gold can be recovered from stream deposits by panning or from dry sediments by yandying . Gold placer deposits near Bathurst, Ballarat and Bendigo triggered the goldrushes of the 1850s. Keen prospectors followed streams to discover the source of placer deposits. These deposits we re then mined ei