Acidification sounds bad, but what exactly does it mean? Are the oceans becoming dangerously acidic? How does acidification affect marine organisms and people?

The pH scale and acidification
The pH scale measures the amount of hydrogen (H+) and hydroxyl (OH-) ions in water. The range is from 0 – 14. A value of 7 is neutral. Less than 7 is acidic (more H+ ions); more than 7 is alkaline (more OH- ions). You can learn more about pH and water from the USGS Water Science School.
Acidification means that the pH is decreasing. Ocean water is naturally alkaline. Before the Industrial Revolution, ocean pH was 8.2. Now the pH of ocean water is 8.1. This doesn’t sound like a big deal, but it means that the oceans have 30 times more hydrogen ions than they did 250 years ago. 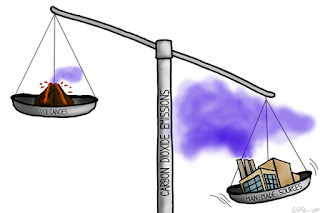 The effect of acidification
When there are more hydrogen ions in the ocean, they bond with carbonate ions (CO32-). This leaves less carbonate ions for organisms to use in building their shells and skeletons. If pH gets too low, shells and skeletons begin to dissolve. You can learn more about this process in this video by the Alliance for Climate Education.
We know that organisms can adapt to changing environments through the process of natural selection and evolution. However, this process takes a long time. Acidification of the ocean is occurring at an increasing rate. When this has happened in Earth’s history, ocean acidification led to mass extinction.
Ocean acidification is a problem for humans because many people in the world rely on seafood for their protein. If shell-building organisms must struggle to get enough carbonate, they grow more slowly. This means less food at the base of the food chain, leading to smaller or less common fish and more hungry people.