In high school science we mostly deal with linear data where there is a constant growth rate, however, there are some instances where students will see logarithmic scales and need to understand why they are used and what that means about the spread of the data.

Logarithmic graphs and scales are used when there is a large spread in the data. For example, when the spread ranges from 0.1 to 1,000 it would be difficult or impractical to try and plot this on a graph with a linear scale. 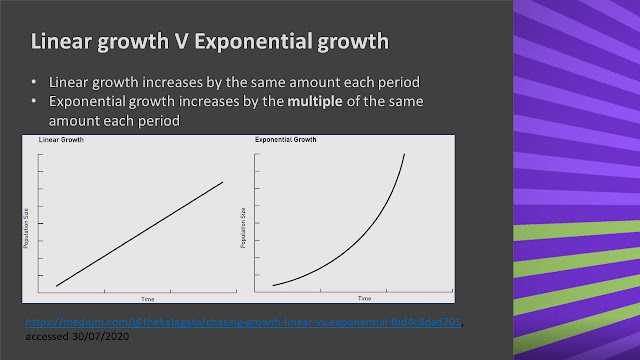 When the data is exponential it can quickly become difficult to plot on a linear graph ( Medium.com, accessed 30/07/2020)

In Earth Science there are numerous instances where logarithmic scales are used to display exponential data. The Volcanic Explosivity Index (VEI) is one of these. The VEI is a relative measure of the explosiveness of volcanic eruptions. The volume of the products, eruption cloud height and qualitative observations (using terms ranging from "gentle" to "mega-colossal") are used to determine the explosivity value. So far, the largest volcanic eruptions recorded in history were assigned the magnitude 8 on the VEI, however, it is an open-ended scale and an eruption larger than this could be possible (although one would hope not to witness it!). 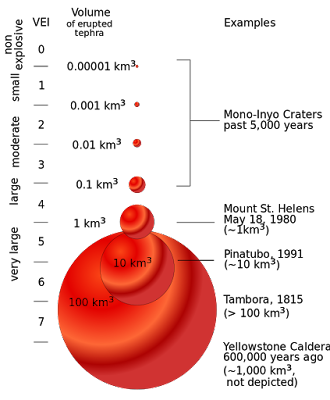 Visual representation of the exponential growth in volume of ejecta and height of ash cloud for each increase in the VEI.  (Wikipedia, accessed 30/07/2020)

Earthquake magnitudes and energy release, a comparison with other natural and man-made events. (USGS, accessed 30/07/2020) 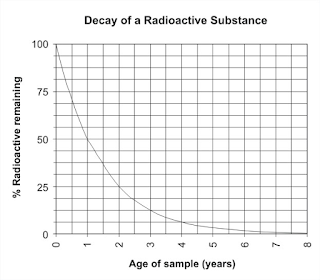 A decay curve is an example of a negative exponential graph. (Wikimedia, accessed 30/07/2020)

An example of a logarithmic graph, which you probably see on a daily basis at the moment, is the number of COVID-19 cases globally. It is especially important that people understand that this is usually presented as a logarithmic graph, where the number of cases increases by a multiple of ten on each increment. Although a country might look like it is “middle of the road” it could have around 1,000 times less cases than a country high up in the graph (and conversely 1,000 times more than a country towards the bottom of the graph).  For example, in the logarithmic graph below Germany appears in the middle, however, when this data is displayed on a linear graph, we see that actually its numbers are relatively low. Moreover, it becomes clear why the data is usually presented on a logarithmic scale as it is very difficult to read off a linear graph. 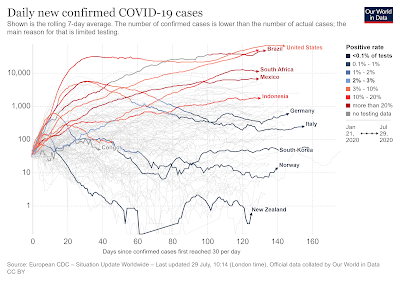 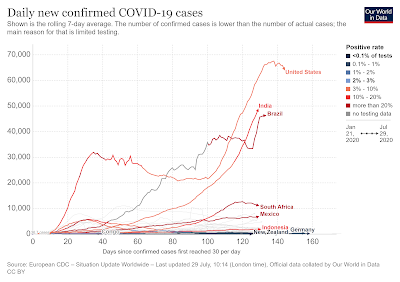 The logarithmic graph (top) spreads the data out more and makes it easier to read, however if the scale is not understood it can be misleading. The linear graph is harder to read (bottom) (https://ourworldindata.org/coronavirus), accessed 30/07/2020

Logarithmic scales are incredibly useful for displaying data which is spread over a large range, however, it is vital that anyone reading the scale understands the increase is in multiples, so what appears to be a small change can represent a large increase.