There are plenty of online animations showing tectonic processes, however, many have oversimplified the processes, leading to misconceptions. With this in mind, we decided to create our own animations, to explain the current scientific understanding of tectonic processes. This project turned out to be much more challenging than we initially imagined, however, we are pleased with the end product. Click here to see the full compilation. 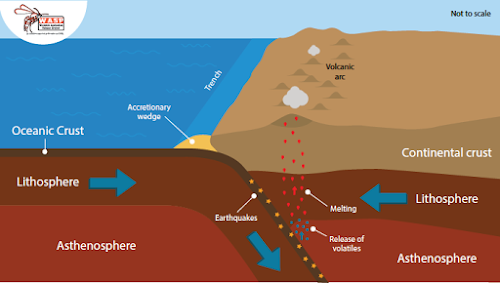 One of the first issues we had to consider for the animations was the scale of the diagrams, as we wanted the animations to be realistic. It soon became clear that to really emphasise the key concepts and processes we would have to use an exaggerated scale for some areas.  As most of the “action” we wanted to illustrate occurs in the crust, we exaggerated the thickness of this layer. The crust is the thinnest layer of the Earth. If you could shrink the Earth down to the size of an apple the crust would be comparable to the skin (perhaps even thinner). The oceanic crust reaches a maximum of around 8 km.The average thickness of the continental crust is around 35 km, with a maximum thickness of around 90 km. The lithosphere is the outer solid part of the Earth and includes the crust and uppermost mantle (lith = rock). The lithosphere varies in thickness, with an average thickness of around 100 km and extending up to around 280 km in some areas. Therefore, to show our volcanoes forming and the rifting process we needed to amplify the size. 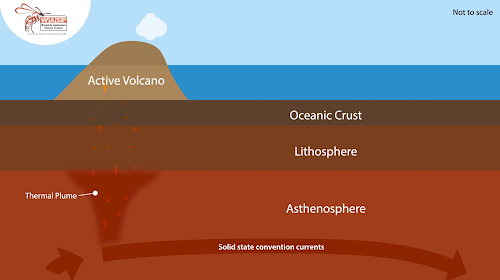 The volcanoes in this animation have been exaggerated in scale in relation to the thickness of the crust and lithosphere, although Mauna Kea in Hawaii measures over 10 km from base to peak.

A misconception that we particularly wanted to address was that of the melting at subduction zones. It is often taught that as a plate subducts it rapidly melts. This is not the case. Plates subduct at a much faster rate than heat conduction and the subducting plate stays cool until great depths. Subduction zones form when two tectonic plates converge and one, or both, is oceanic lithosphere. The denser (oceanic) plate sinks into the mantle. As it sinks deeper into the mantle, the pressure increases. At around depths of 100 km, pressure is such that metamorphism of the hydrous minerals contained in the oceanic plate, such as amphiboles, occurs. This causes a release of volatiles (mainly water). The water will rise upwards into the hot mantle rocks, lowering their melting temperature.  This enables some minerals to melt and rise up towards the surface, in a process known as partial melting.

Although Earth Science studies ancient processes, it is a relatively young science. There is still so much to be discovered and further research is always advancing our understanding regarding these processes. We hope that the animations can be used to help explain current scientific understanding of these processes and look forward to creating future iterations, with development of our knowledge.