In the early 1900s a young petrologist from Canada carried out a series of experiments that changed the way geologists understood igneous rocks. His results help us to understand the origin of magmas, types of igneous rocks and volcanic eruptions.

Norman Bowen carried out a series of experiments between 1910 and 1914, using new high temperature furnaces, petrographic microscopes and chemical analysis methods. He found that minerals in mafic magma melted at different temperatures. This helped to explain the composition of magma, lava and igneous rocks in different settings. The findings are summarised in the Bowen’s Reaction Series diagram which relates the mineral composition of magma to mineral melting points, arranged by temperature. 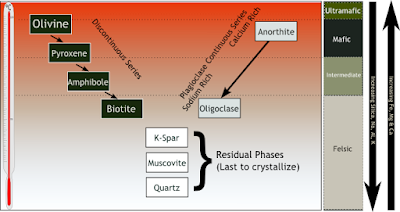 The mineral composition of magma is related to its temperature in Bowen’s Reaction Series (Colivine 2011, Creative Commons)

Igneous rocks are divided up based on the proportions of light and dark minerals. The light-coloured silicates are the main minerals in granitic rocks. These are called felsic because they are made of feldspar and silica.

Rocks with at least 45% dark silicate minerals and no quartz are basaltic. They are called mafic from magnesium and ferrum (Latin for iron). The higher metal content makes basaltic rocks darker and denser than granitic rocks. 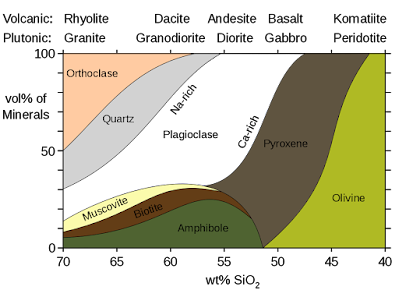 Partial melting of the mantle

Bowen’s reaction series explains why mafic magmas are so hot (up to 1,250°C). High heat is required to melt the mafic minerals in Earth’s mantle. Mafic magma is produced over hot spots in Earth’s mantle. A familiar example of this is Hawaii. The Hawaiian volcanoes produce mafic lava flows of dark basalt.

Differences in pressure and the addition of water can affect the melting point of minerals, however, the order of partial melting remains the same.

Hot mafic magma in Earth’s crust may also break and trigger partial melting of the surrounding rock. The molten crustal rock is assimilated into the magma and changes its composition.

Magma also cools and changes composition within Earth’s crust. As the outer portions of the magma cool, mafic minerals crystallise first. These mafic minerals solidify around the edges of the magma chamber or sink to the bottom. The main body of magma becomes more granitic (felsic) over time.

Knowing the melting points of minerals helps us to understand how magmas are formed and change over time. Bowen’s experimental work has been vital to our understanding of how igneous rocks form and why their composition varies within large structures.