Geophysics allows interpretation of the sub-surface of the Earth (and other planets) using indirect evidence. Geophysical analysis is conducted when you cannot get direct access to the rocks or do not wish to disturb what lies below. Geophysics uses the properties of rocks and soils to explore the Earth in ways the human senses cannot.

One of the most commonly used geophysical methods is Ground Penetrating Radar (GPR), this is an electromagnetic method. 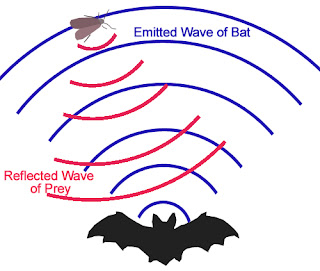 Bat echolocation. Bats use echolocation to help them “see” in the dark (Wikimedia Commons)

On a basic level, GPR surveys can be compared to echolocation used by bats and other animals. Bats create sound waves that then bounce off an object and are reflected back to them. The bat can tell how far away the object is by the amount of time it takes for the reflected sound to return. The intensity of the reflection can also give information about the type of surface it has hit (if it is firm or soft). This enables them to build up a picture and helps them with navigating and hunting.

GPR surveys work using the same principles. Signals are sent into the ground and then reflected at boundaries (changes in rock types or properties). The two-way travel time and intensities of the reflected waves are recorded to help image the subsurface. GPR methods differ from echolocation in that they use electromagnetic radiation rather than acoustic energy.

A GPR transmitter emits pulses of electromagnetic energy (high frequency radio waves) into the subsurface. Changes in the sub-surface are detected based on differences in permittivities.  A change in permittivity may cause a pulse to be reflected or refracted back to the surface and detected by the antennae.

The permittivity of a substance is defined as the ability to store energy in an electrical field.  Different subsurface material types will have different permittivities. The amount of water in the subsurface can also greatly alter the permittivity. Certain features will exhibit specific characteristics in the reflectance wave pattern. For example, reflections from metallic surfaces will have high amplitude.

The frequency of the pulses used will determine the depth and resolution of the imaged area. Lower frequency waves can penetrate deeper into the ground, however higher frequency waves will give clearer resolution. Often surveys are conducted multiple times with various frequencies to enable more accurate interpretation. The electrical conductivity of the subsurface also greatly affects penetration depth. An increase in the electrical conductivity will attenuate the introduced EM (electromagnetic) wave, making it difficult to penetrate the subsurface. For this reason, GPR does not work well in clays and waterlogged soils, where penetration may be as little as a few centimetres. Highly heterogenous soils can also cause a lot of scattering, whereas homogenous soils will not show any reflections. 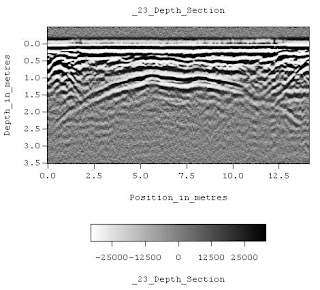 GPR depth section (profile) showing a single line of data from the survey of the historic crypt shown above. The domed roof of the crypt can be seen between 1 and 2.5 meters below surface (Wikipedia, accessed 1/10/2020).

GPR surveys can be conducted over a multitude of scales. Generally, surveys give clearer resolution when the transmitter is in contact or very close to the surface, reducing noise from other radio transmitters. However, airborne survey can be conducted and have the advantage of covering more area in a shorter time, as well as enabling areas with difficult terrain or high vegetation to be surveyed. They can detect a multitude of subsurface structures and artifacts. They are non-intrusive, non-destructive and benign, making it safe for use in public spaces and also safe for the user, with no specialist safety training required.

Like all geophysical methods, data will only enable interpretation and production of a model – numerous models could be created from the same data. GPR surveys also have relatively high energy consumption, which can be problematic for extensive field surveys. GPR does not penetrate very deep into the subsurface compared to other geophysical methods. With most rock types and dry sandy soils, depth of penetration is around 15 metres, however with highly conductive soils (clays and soils with high moisture content) depth can be as little as a few centimetres. GPR is therefore is of minimal use for resources exploration unless the targets are close to the surface.