Determining the densities of rocks has many different applications, from selecting building materials to finding out about the interior of the Earth.  Determining densities can also help to provide information about particular rock types.

This video shows four simple methods you can use to determine the densities of different rock types.

The densities of rocks depend on numerous factors including the texture and mineral content.  Sedimentary rocks tend to be less dense than metamorphic and igneous rocks, as they are more porous. The porosity of a sedimentary rock can vary depending on the sediment size and shape.  Fine sediment will compact more easily than course sediment. For example, mudstone is generally denser and less porous than sandstone. Round grains will also create more pore spaces, whereas platy minerals like kaolinite can stack like Lego pieces reducing the pore spaces. The amount of cement between the grains is one of the most important factors determine the porosity and density of a sedimentary rock. A well cemented rock will be denser than a poorly cemented rock. 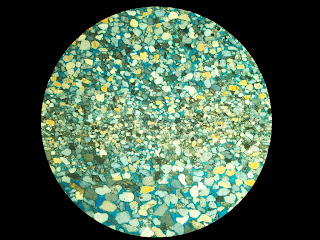 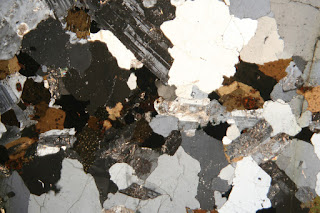 A thin section of granite showing interlocking crystals with no space between them. (Wikimedia, accessed 28/08/2020)

Metamorphic and igneous rocks have interlocking crystals with very little to no pore spaces (pumice and scoria being an exception). Their densities are mostly determined by their mineral content. Felsic igneous rocks (with high silica content) such as granite, will generally be less dense than mafic igneous rocks, such as basalt, which have more iron rich minerals.

Rock and mineral density tables can be found here.

The density ranges of different rock types can be determined in a lab and then used to assist with the interpretation of geophysical surveys. Denser rocks and materials will have a higher gravitational pull than less dense materials. Gravitational surveys can therefore be very useful methods of exploration for resources which provide a strong gravitational contrast.  For example, a salt dome will generally have much lower density than the rocks surrounding it and will give a low gravity reading. Gravity methods are also useful for finding voids such as old mine workings, hidden caves, and areas of potential sinkholes. Changes in gravity measurements around a volcano can indicate magma movement, which may indicate a possible eruption.

Understanding how the densities of rocks vary within the Earth helps geologists to determine more about the interior structure of the Earth. From analysis of meteorites and application of the principle of gravity settling (see blog post – Gravity Settling), we know that the density of rocks increases towards the centre of the Earth. Laboratory studies show that when density increases, the velocity which seismic waves are transmitted decreases. Therefore, we would expect seismic waves to slow down as they travel deeper through the Earth. However, this is not the case (at least, until the outer core is reached).  Scientists have determined that this is due to the rigidity and incompressibility of rocks increasing. Scientists can also use their understanding of seismic velocity in relation to rock density to help map out the location of mantle plumes, magma and subducting plates in a process known as seismic tomography. This has helped with our understanding of tectonic processes. 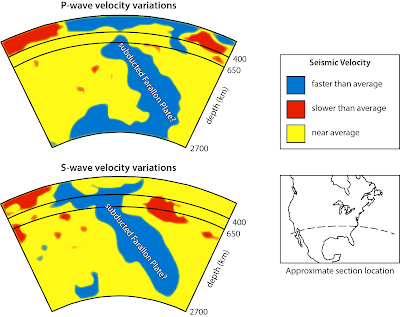 Seismic tomography uses the velocity of seismic waves to help map out areas of differing temperature within the Earth. Waves travelling faster than average can indicate colder regions, whereas waves travelling slower than expected can indicate hotter regions. (Wikipedia, accessed 28/08/2020)

Understanding how seismic velocities vary with rock types is also a key principle used in seismic reflection and refraction methods, which are commonly utilised in hydrocarbon exploration.  Changes in velocities can indicate changes in rock types or indicate fluids in pore spaces which is useful when looking for oil. 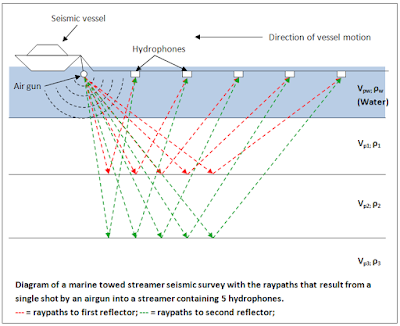 Seismologists can interpret the type and depth of rock using velocity and intensity data collected from seismic surveys. (Wikipedia, accessed 28/08/2020)

However, because of the range in densities which rock types can have, any geophysical studies can only be used to produce interpretations and models. They create approximations which can be better defined with addition of models produced from other types of survey.