Earth materials are vital to our modern life but how do we find them? The exploration process is much more efficient with the aid of technology.

Before modern geology, people found resources such as coal in exposed rocks. An example of this is Awabakal people in the Newcastle area who used coal that was accessible from coastal cliffs. Geological exploration did not exist as a discipline. Resource finds were often a matter of good luck rather than scientific investigation.

Gold is an example of a resource sometimes found in placer deposits. Weathering releases gold from rock and it is carried by gravity or water to a deposition point – often a bend in a stream. Gold can be recovered from stream deposits by panning or from dry sediments by yandying. Gold placer deposits near Bathurst, Ballarat and Bendigo triggered the goldrushes of the 1850s.

Keen prospectors followed streams to discover the source of placer deposits. These deposits were then mined either on the surface or underground using hand drills and explosives. 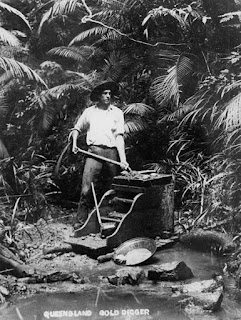 Prospector shovelling river gravel into a gold washing cradle next to a Queensland stream (State Library of Queensland, public domain)

Geological mapping was the first big advance in exploration for valuable earth materials. William Smith’s 1815 geological map of England revolutionised people’s understanding of Geology by projecting what must lie underneath the ground. Geologists were able to use the rock layers to predict areas of coal deposits that were needed to fuel the Industrial Revolution. 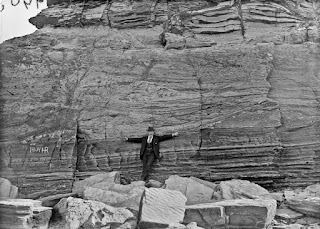 A geologist from the Geological Survey of NSW indicates crossbedding in Narrabeen Sandstone (early 1900s, courtesy of Department of Regional NSW)

New South Wales established a Geological Survey in 1875 and produced the first state geological map in 1880. As geologists studied the association of valuable minerals with specific rock types and used geological maps to identify areas that might hold valuable deposits. 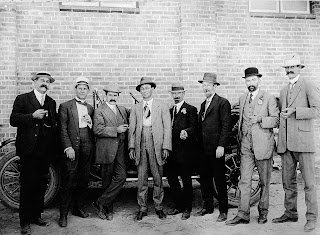 Staff of the Geological Survey of NSW pose with their first field vehicle (circa 1920, courtesy of Department of Regional NSW)

The new theory of plate tectonics led to tectonic maps in the 1970s. Geologists could use knowledge of tectonic structures and events to predict the locations of mineral and fossil fuel deposits. However, much exploration was centred around areas of existing mines. This is known as brownfields exploration and increases the chance of finding a deposit, as the area is proven to have valuable resources.

Technological developments have revolutionised mining exploration. Aerial surveys of gravity, magnetic fields and radiation can cover large areas relatively quickly and provide valuable data for mineral exploration. Seismic data allow us to look beneath the surface of Earth at structures and resources. Data collected by geological survey organisations is publicly available on platforms like MinView (NSW) and Google Earth. Geologists can access this information and narrow the search area from the comfort of home.

Once an area in the field is identified as a promising site, geologists can use portable geochemical analysis machines to find out about rock composition before collecting samples for more detailed laboratory testing. One example of this is an x-ray fluorescence (XRF) machine. These machines provide an analysis of the elements in rock or soil within seconds. 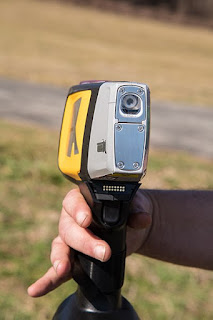 Handheld XRF machines provide a quick analysis of the elements present in rock or soil in the field (US Dept of Agriculture 2018, public domain)

To truly understand what lies beneath the surface, diamond drills are used to collect rock cores. Cores range from 300 – 800 m in length. Drilling a core is an expensive exercise, costing an average of $100 000! This sample of rock provides direct evidence of what lies under the surface. The rock’s entire core can be scanned with a HyLogger to identify the major minerals and determine which sections should be sampled for detailed chemical analysis, to characterise the ore grade of a deposit.

Mapping and geophysical scans have revolutionised mineral exploration. What was once an exhausting exercise on foot has become a computerised, data-driven search for valuable resources. 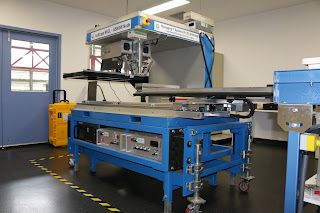 The HyLogger machine rapidly scans hundreds of metres of drill core in near and far infrared light to characterise the minerals (courtesy of Jake Moltzen, Department of Regional NSW)