Rock art can be found across the globe, and provides insight into past cultures, climates and environments. Australia is home to some of the richest collections of rock art that any country holds. Researchers have estimated that there are more than 100,000 significant rock art sites around Australia with over 5,000 being found in the Northern Territory’s Kakadu National Park alone (National Museum Australia).

Why do we find rock art in Australia?

Before writing was developed, people used rock art to record events that occurred, depict stories or important cultural practices as well as everyday experiences. In some communities, the creation of rock art is a tradition continued in the present day where the practice of painting and recording is as important as the finished artwork. As Australia has such an expansive and ancient anthropogenic history, with evidence of the first humans arriving here over 65,000 years ago, it is unsurprising that so much rock art can be found across the continent.

This series of short videos from ABC education provide further information about rock art through time at Kakadu National Park.

What is Rock Art?

There are two main types of rock art, both of which can be found across Australia. They are petroglyphs and pictographs. 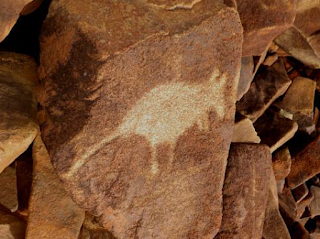 Petroglyphs are images which have been carved into a rock. These can be indentations into the rock. Examples can be found in northern Tasmania (First Rock Art). As shown in the picture above, petroglyphs, such as those found at Murujuga, also known as the Burrup Peninsula, in Western Australia, have been created through scratching off the weathered rock surface to expose a lighter fresh rock below.

For more information on petroglyphs and activity ideas on how students can create their own replica petroglyphs, visit the PALMS website or watch this PALMS instructional video.

Pictographs are a drawing or painting on a rock surface.  Pigments used to create pictographs come from numerous natural products, such as blood, charcoal and rock or mineral materials, including chalk and ochre. Pictographs don’t often survive as long as petroglyphs as they are more easily washed away or affected by sunlight. However, pictographs found in rock shelters, caves and areas with dry climates have been found to be thousands of years old.

This article describes pictographs which have recently been studied in Western Arnhem Land which are believed to be between 6,000 – 9,400 years old and show relationships between humans and animals.

Why is Rock Art important?

At present, the oldest Aboriginal rock art has been dated at around 30,000 years. However, rock art is notoriously difficult to date and there have been tools found which were used to create the art which have been dated to close to 50,000 years old. Rock art is extremely valuable in providing information about changes in climate, sea level, flora and fauna as well as cultural behaviours and beliefs. Conservation of rock art helps to preserve these stories and teach others about culture and beliefs, providing better understanding into traditional ways of life.