Salt lakes are a common feature in the Australian landscape. They are often dry but can undergo amazing transformations when flooding occurs. The salinity level of the lake water can change dramatically, triggering a change in the local ecosystem.

What is a salt lake?

A salt lake is, as the name suggests, a land-locked body of water that has a high concentration of dissolved salts, usually sodium chloride. Salt lakes can be found all over the world and may be naturally occurring or also be the result of people clearing the land of trees. You may have seen spectacular pictures of different coloured salt lakes such as the pink Lake Hillier near Esperance in Western Australia. These lakes are pink due to the algae that live in them. 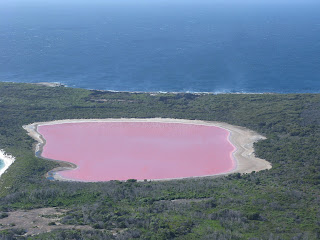 Since many areas of Australia have low rainfall, areas where water collects, like lakes, will tend to have low water levels. This leads to any salts that are dissolved from surrounding soil and rocks to concentrate.

The concentration of salt can be anywhere from around 3g/L to as high as 270g/L. By comparison, seawater has an average salt concentration of 35g/L. It is not surprising to see salt crystallising out to form a crust on salt lakes as water levels drop due to evaporation. What is more unusual is when a salt lake has an influx of fresh water such as when it rains. Since lakes will form in lower lying areas where water collects, a significant amount of rainfall will drastically change the water level, and thus the salt concentration of a salt lake.

Kati Thanda-Lake Eyre in South Australia is a particularly large salt lake that experiences drastic changes in its ecosystem approximately every ten years. Lake Eyre is at the centre of a very large low lying area, or basin, approximately one sixth of Australia. The Lake Eyre basin spans 1.2 million square kilometres across South Australia, Queensland, New South Wales and the Northern Territory. Any heavy rain falling in the basin that is not lost to evaporation, may find its way into Lake Eyre. 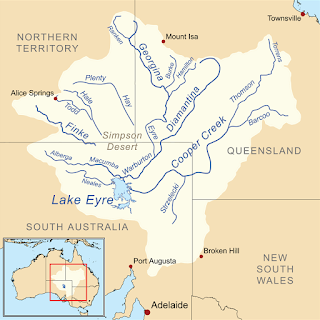 Unlike some lakes, Lake Eyre is at the centre of an endorheic basin which means it has a closed drainage system. It is the lowest part of Australia at 15m below sea level and the endorheic system means there are no rivers or streams draining the lake to the ocean so when it fills it becomes the largest lake in Australia.

Lake Eyre may be filled by floods that occur anywhere in the massive basin and it may take some time for flood waters to make their way into the lake. In 2009, floods in Queensland caused Lake Eyre to flood about four months later. This led to a huge change in the local ecosystem, with a burst of life in the area including large flocks of migratory birds settling at the lake. 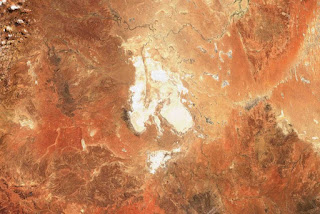 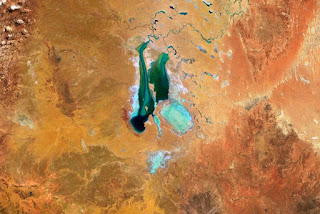 Further information about the Lake Eyre basin and the changes that occur during flooding events can be found at these web pages:

When a salt lake, such as Kati Thanda-Lake Eyre floods, the fresh rainwater will dilute the salt concentration of the lake water. In contrast, very hot weather or drought events will increase evaporation levels, resulting in an increase in salt concentration in lake water. This may even lead to the salt crystallising out to form a crust around the edges and surface of the lake. This salt may be harvested to use as a resource for food or industrial processes.

The Salt Lake Puddles activity in this PALMS demonstration video shows students how lake water salt levels may be changed by flooding. The accompanying Student Worksheet can be found here and the Teacher’s Notes here.