The greenhouse effect is a natural process that warms the Earth, helping to maintain constant temperatures which sustains life on Earth. When the Sun’s energy reaches the Earth’s surface, some of it is reflected back to space and the rest is absorbed and re-emitted as heat. The ability of a surface to reflect solar energy is known as its albedo.

Reflectivity of surfaces with high albedo versus low albedo (https://climate.ncsu.edu/edu/Albedo). 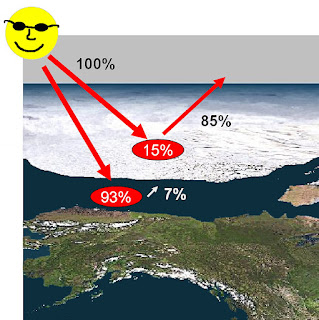 Albedo and the enhanced greenhouse effect

As the temperature of the atmosphere increases, we experience glacial retreat and the break-up of sea ice, increasing the area of deep oceans. Deep oceans are dark coloured and have low albedo, absorbing much of the incoming solar energy. They release this energy as heat, accelerating the melting of sea ice. This increases the area of oceans compared to the area of sea ice, further reducing the local surface albedo.

Modelling albedo and the greenhouse effect

You can investigate the effect of albedo on air temperatures by constructing a simple model of a greenhouse and lining your model with either black or white paper. The AusEarthEd video on the Greenhouse Effect III: Albedo demonstrates one method to model this.

Can you relate your findings to the surface albedo effects in the environment?

The Lifecycle of Geology in a Civil Engineering Project - Part 2

The Lifecycle of Geology in a Civil Engineering Project (Part 2) Do Civil Engineers need to know any geology? Find out in our latest blog series which walks you through the lifecycle of a project and just why geology is key: Geology for Initial Planning and Scoping Geology for Construction Materials Geology for Foundation Design Geo hazard Identification Impacts of Geology on Construction Geology for Construction Materials (Part 2) Geology is the single most important factor in making and finding construction materials for civil engineering projects. ALL natural construction materials are a function of the geological process that created it. So, what kind of construction materials do we use in a civil project? A lot! Some are described below: General fill material to build up ground levels. Pavement materials for roads and hardstands. Sand fill or aggregate/gravel material for drainage. Clay fill material for impermeable layers like dam embankments and pond cl

The Lifecycle of Geology in a Civil Engineering Project - Part 1