Groundwater is something we rarely think about because it is hidden underground in the spaces between grains of sediment and rock. However, groundwater is extremely important to Australia, supplying water for drinking, agriculture and the environment.

There are several specialised terms to know when studying groundwater. An aquifer is a connected area of sediment and/or rock that can hold water. Australia’s largest aquifer is the Great Artesian Basin. This extensive aquifer covers 20% of Australia’s land surface and is estimated to hold 65 000 million megalitres of water. That volume of water could fill 130 000 Sydney Harbours! 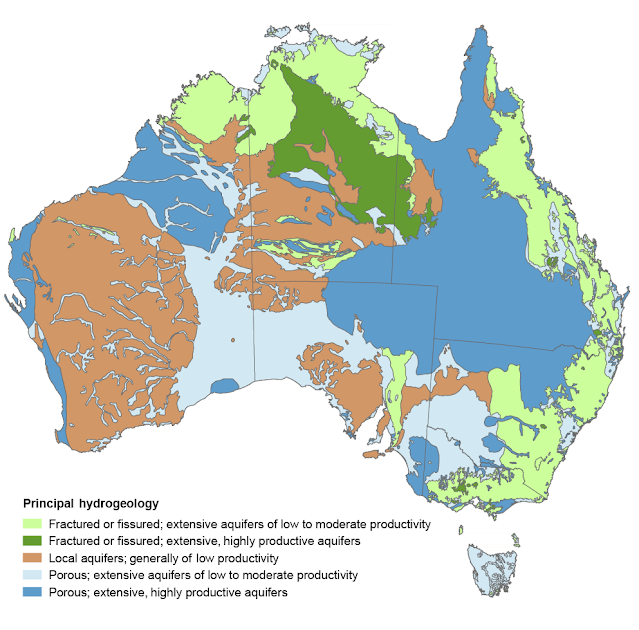 The Great Artesian Basin is the dark blue area across Queensland, the Northern Territory, South Australia and New South Wales. (Australia: State of the Environment Report 2016, via Bureau of Meteorology Groundwater Insights)

An aquifer that has no barrier above it can discharge into streams and recharge from rainwater. This is an unconfined aquifer. Aquifers that have water-resistant layers above and below them are known as confined aquifers. 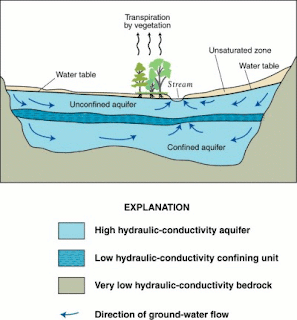 Unconfined aquifers have significant water flow from and to the environment. Flow to confined aquifers is more limited, depending upon the type and extent of the confining layer(s). (USGS, public domain)

In many areas of Australia, groundwater is the only reliable source of fresh water for people and livestock. Approximately two-thirds of the drinking water in Western Australia is sourced from groundwater. Groundwater may be bottled for direct use or used by beverage manufacturers to make soft drinks and beer.

People do not just drink groundwater. About half of the groundwater use in Australia is for irrigating crops, allowing us to grow food when rainfall is scarce and unpredictable. Many mining operations in arid areas are entirely dependent upon groundwater for their people and industrial uses such as dust control and mineral extraction.

Groundwater supplies unique spring and wetland ecosystems and is a major determinant of stream flow in some areas. Many plants and animals depend upon groundwater for their survival. Understanding the connections between groundwater, wetlands and rivers is the subject of ongoing investigation and monitoring by the CSIRO, Geoscience Australia, Bureau of Meteorology and other agencies. These models are vital for sustainable groundwater use. 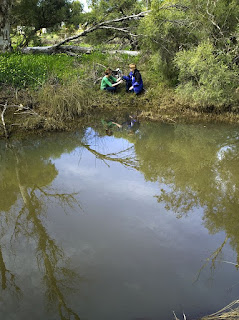 In coastal areas of Australia, seawater may flow into aquifers and seep inland as natural groundwater discharge is stopped or reversed by use of bores. Contaminants such as gasoline, oil, pesticides and industrial chemicals can migrate into aquifers and move large distances below the surface.

Overuse of groundwater has many potential impacts. Ecosystems dependent on groundwater are placed at risk. This includes 98 endemic species in the Great Artesian Basin region. Removing groundwater may cause subsidence and collapse of overlying land. The San Joaquin Valley in California has sunk more than 8 metres in the past 100 years due to overextraction of groundwater.

This pole shows the extent of subsidence from overuse of groundwater in the San Joaquin Valley (USGS, public domain)

Climate change naturally impacts on groundwater levels and increased human use of groundwater can magnify the effect. Greater evapotranspiration and increased pumping for human use lower groundwater more quickly in times of drought. Thus, groundwater use is seen as a temporary measure in many cities to be used only during drought, allowing aquifers to replenish during times of higher rainfall.