One question that we are all bound to have asked as children is ‘Why is the sky blue?’ which may have led to some interesting responses from adults close by! This may also have been followed up with ‘How are clouds made?’ to further satisfy our curiosity about the world around us. Read on to find out some clues as to how you can explain and demonstrate these concepts to inquisitive young ones.

Why is the sky blue?

We now know a little more about the spectrum of colours in visible light and how rainbows form, so let’s move on to our initial question about why the sky appears blue. Sunlight entering Earth’s atmosphere is scattered and bent by gases in the atmosphere. Clean, dry air scatters blue light the most. Therefore, on a fine and sunny day, the sky will look blue. On rainy days, the sky looks grey because the water droplets in the air scatter all colours of light, not just blue, and the mix of light colours appears grey to our eyes.

How are clouds made?

Clouds are collections of lots of tiny water droplets or ice crystals. They form due to a process known as condensation, as part of the continuous water cycle. You can find out more about the water cycle by watching The Water Cycle animation from WASP. 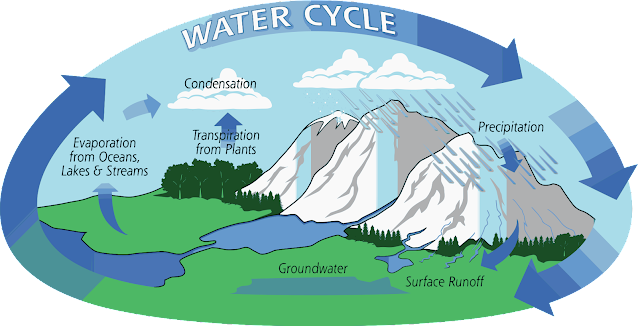 Water can exist in three states – solid, liquid or gas (often called vapour). Clouds form when warm air containing water vapour gets cooler and changes to droplets of liquid water or small crystals of ice which collect together.

Clouds appear white or grey because the water droplets or ice crystals are large enough to scatter all the colours that make up white light, so the light doesn’t split into its component colours. When the droplets or ice crystals in clouds become heavier, by collecting on particles in the atmosphere, they will fall to the Earth’s surface as a form of precipitation (rain, snow, sleet, hail).

A global cycle represents the path of an element as it moves through the spheres of the Earth – the biosphere, lithosphere, hydrosphere and atmosphere. An example of this is the nitrogen cycle. Nitrogen (N) is an essential element for plant growth, forming the structure of DNA and amino acids. While there is an abundance of nitrogen gas (N 2 ) in the atmosphere, in this form it is not available for plant uptake and must be converted into nitrate (NH 3 ) before it can be used. The nitrogen cycle demonstrates the conversion of nitrogen gas to nitrate. Nitrogen cycle Legumes Legumes Follow the path of nitrogen in the nitrogen cycle to find the nitrogen-fixing bacteria. These bacteria convert the N 2 in the atmosphere into nitrate, making it available for plant uptake. Some of these bacteria form a symbiotic relationship with plants called legumes. The bacteria live in nodules on the legume plant roots and harvest the atmospheric nitrogen, making it immediately available for

It is fairly simple to demonstrate convection in water. All you need is a bowl, some warm water, ice and food colouring (see our video ). Students can relate this to oceanic circulation, a major driver of the movement of heat and nutrients around the globe (see our post on this). Convection in water (R Nave, Hyperphysics , accessed 17/6/2020). Convection in air is another everyday example of this phenomena and possibly simpler to demonstrate. Think about winds or the heating of a room. Convection in air (Energy Education, accessed 17/6/2020). What is more difficult to demonstrate, and relate to, is convection in the Earth’s mantle. How can a solid convect? This puzzle leads to one of the major misconceptions in the Earth Sciences, that the mantle is liquid. It is easy to understand where the misconception comes from. Although students have observed convection in gases and liquids around them they are very unlikely to understand the convection of solids. The classic