The Lifecycle of Geology in a Civil Engineering Project - Part 3

Do Civil Engineers need to know any geology? Find out in our latest blog series which walks you through the lifecycle of a project and just why geology is key:

Geology for Initial Planning and Scoping

Impacts of Geology on Construction

Geology is a very important factor in designing and constructing foundations. After all every foundation sits on the soil or rock that exists beneath a structure!

The soil or rock conditions (i.e., the geological materials) beneath the site often govern the type of foundation that is chosen.

Typical foundations are shown in the figures below. 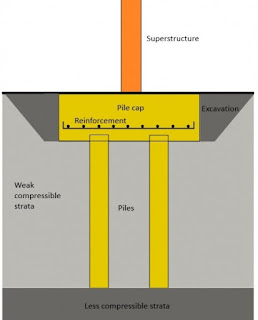 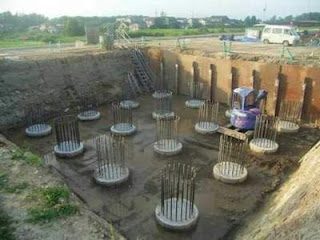 A typical shallow foundation (the Constructor) 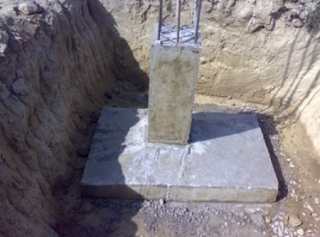 The above scenario provides a basic example of why the geology is so important for civil engineering.  Furthermore, with a detailed engineering geological assessment, potential issues can be raised and addressed.

Undertaking an intrusive investigation using boreholes may provide some geological information of the foundation subgrade materials. But it is the geological interpretation that identifies factors that were not encountered or that cannot be seen with the investigation. The project examples below demonstrate the importance of geological knowledge in informing foundation design.

During preparations for a project for a road bridge in the Eastern Kimberley region of Western Australia, metamorphosed sedimentary rocks were identified along the proposed bridge alignment. Through geological mapping, knowledge, experience and careful interpretation, igneous rocks were also identified in the immediate area. Although these were not specifically encountered during the borehole drilling, it was noted that it was likely that they would be present in the area.

During construction of one of the bridge pad footings, a contact between the two rock types was encountered with an associated shear zone approximately 0.5m wide (shown as red dashed in figure below). 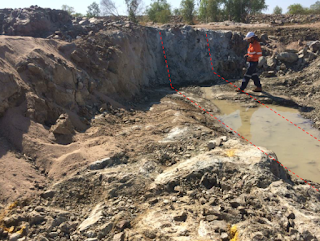 The foundation design required the highly fractured shear zone to be excavated to reach competent rock.

Because a geological interpretation of the area was undertaken, this scenario did not come as a surprise and was easily dealt with during construction.

A borehole encountered sand above limestone when drilled to assess the ground conditions beneath a site (see below). 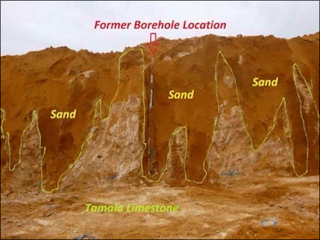 Without geological knowledge of the area, you may only have data from boreholes that encountered sand to a few metres depth whereas in some locations, limestone is very near the surface. Knowing the geological processes that form and shape the Tamala Limestone in this area meant that it was anticipated that pinnacles such as these would be encountered in the excavation.

This is particularly important for assessing the excavatability and allowable bearing pressures for the shallow foundations at this site.

A final example for the importance of geological context related to a marine project with driven piled foundations. A geotechnical investigation was not enough to identify the complexity of the area alone.

If we just look at the boreholes and Cone Penetration Tests (CPTs), a simple ground model can be created. The below cross section image displays a ground model that could be interpreted by just linking up strata from investigation points (Note: additional locations were also completed but are not displayed). 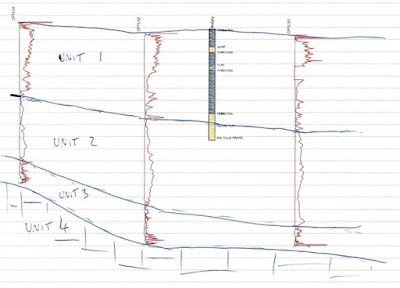 This is a reasonable interpretation if solely looking at the site area and not looking externally to the site. However, the next section shows the importance of using engineering geology/geomorphology to assist in ground model interpretation.

Looking outside the bounds of the site, a couple of easily identifiable elements can be interpreted. A palaeochannel is known to be present in this area and it is possible that it would roughly follow the meandering of the existing Swan River. In addition, the channel was steep sided creating high angle cuts within the limestone. It is possible that the steep limestone cliffs that are present on the river shore immediately adjacent to this site were formed by the palaeochannel.

With these interpretations, together with the knowledge that here the limestone is typically deeper than other areas surrounding the site, it is possible to interpret a different ground model, as shown on the cross section below. 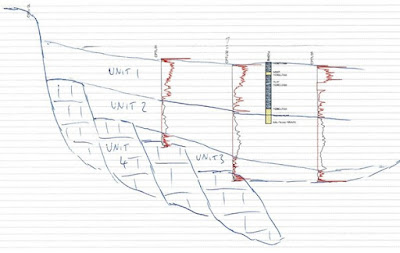 This model indicates the potential for a steep sided slump within an historical channel. The driven piles had to be carefully designed to ensure they did not penetrate deeply into the potential slumped limestone features.

These case studies presented display the importance of looking outside the site and of using engineering geology and geomorphology skills and interpretation to establish ground models for civil engineering projects.