For National Science Week 2021 we are celebrating Food – Different by Design. We count on having a variety of foods available in our local markets, but is it local food? In this post, we will look at Australian agricultural production and how the industry has embraced new technologies.

Where do we produce food?

Agriculture is a BIG deal in Australia, accounting for 55% of land use and 25% of water extraction. According to the Australian Bureau of Statistics, grazing occurs on 325 million hectares and cropping on 31 million hectares. Forestry plantations occupy 700 000 hectares. Although officially agricultural land, another 19 million hectares is not used for production and 41% of this land is set aside for conservation. The diagram below shows the locations of different types of agriculture. 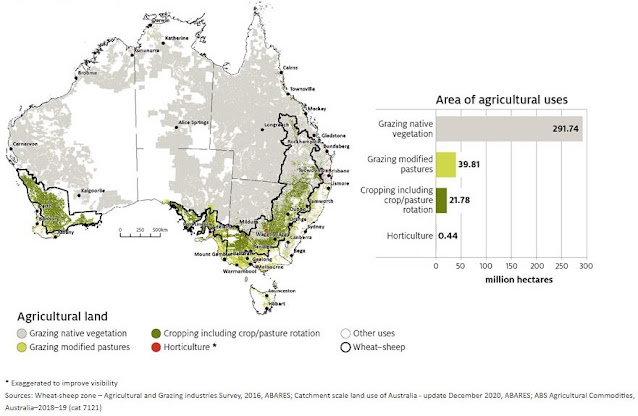 How much food does Australia produce?

Australian farmers produce much more food than we need – enough food for 60 – 70 million people! As a result, 71% of our agricultural production is exported. Although Australian production meets our nutritional needs, we import 11% of our food and beverages. Imports are mainly processed food such as frozen and canned vegetables, with some out of season fresh produce. 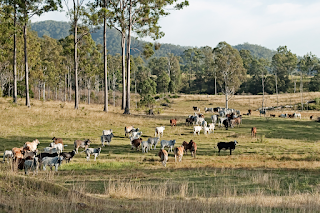 How do advances in technology affect food production?

In addition to advances in machinery, there are three main genetically modified (GM) crops in Australia. GM cotton resists insect pests and tolerates herbicides. There are two types of GM canola, one is resistant to herbicides and the other produces healthy Omega-3 oils. Safflower has also been genetically modified to produce more oleic acid in the seeds. Safflower oil is used for industrial oils and animal feed. 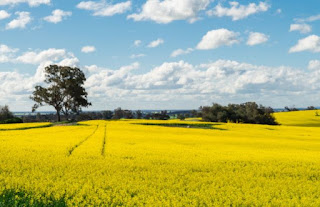