Banded Iron Formations (BIFs) are large, iron-rich sedimentary rock deposits. They are indicators of conditions on early Earth AND the source of Australia’s iron deposits. In the past 45 years, our understanding of BIFs has changed tremendously, and a much more complex picture of the ancient oceans has been revealed.

In 1973, Preston Cloud published an influential paper suggesting that the evolution of oxygenic photosynthesis (which produces oxygen as a waste product) was responsible for the majority of these iron deposits. The early Earth had very little free oxygen and large amounts of dissolved iron in the oceans. As oxygen was produced, it reacted with dissolved iron to produce insoluble iron oxides that dropped to the sea floor, forming BIFs. 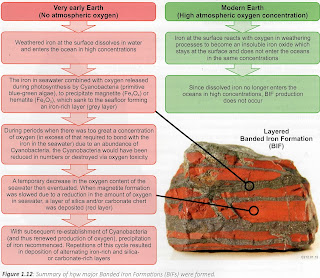 Cloud’s theory accounts for enormous changes to ocean chemistry, as the oceans were gradually depleted of iron. Atmospheric carbon dioxide greatly decreased before the build-up of oxygen and carbon was transferred into the biosphere. This resulted in large quantities of cyanobacteria, the first organisms to carry out oxygenic photosynthesis.

The Great Oxygenation Event (GOE) occurred 2.4 – 2.35 Ga (billion years ago). At this time, atmospheric oxygen finally built up to a level 0.001% of that we experience today. Although there was only a little oxygen, it had a profound effect. Many microbes were driven into marginal habitats or became extinct. Aerobic respiration evolved and evolution began to pick up pace. There is not an exact time for the GOE, as this appears to have happened in pulses. However, by 2.3 Ga, oxygen was a permanent feature of the atmosphere and upper oceans. Deposition of BIFs gradually decreased as oceanic iron was depleted and oxygen concentrations increased.

In the 45 years since Cloud proposed his theory, many new ways of examining early life have been developed. Scientists examine rock using scanning electron microscopes, carry out sophisticated geochemical analyses and have found an array of modern microbes that carry out photosynthesis without producing oxygen. Ongoing research suggests that the old story needs to be modified. 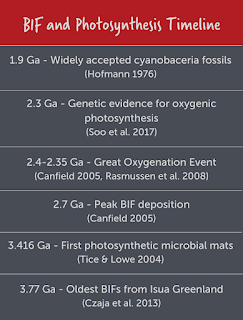 The role of oxygen from photosynthesis has now been pushed back to the late stages of BIF deposition. Even then, the photoferrotrophs may be responsible for much of the iron deposition in lower layers of the ocean. Investigations into ancient ocean chemistry help us to understand the enormous changes that Earth has been through that were triggered by life, billions of years before humans evolved.