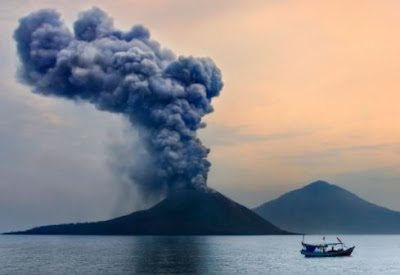 When most volcanoes erupt, the carbon dioxide will not contribute significantly to warming. Most is dissolved in the oceans and absorbed by natural sinks, like plants. However, long-lasting eruptions from large igneous provinces (LIPs) release much more carbon dioxide over a million years or more, leading to global warming. LIPs are produced by the breakup of supercontinents and are implicated in some of Earth’s largest extinctions, such as the Great Dying at the end of the Permian and the end-Triassic extinction. Carbon dioxide released by LIPs persists for a long time in the atmosphere. It is gradually drawn out of the atmosphere by the weathering of the basalts produced in the eruption.

Explosive volcanic eruptions can eject sulfur dioxide into the stratosphere causing global cooling for years. The sulfur aerosols reflect visible light and cause infrared rays to be trapped in the stratosphere, rather than reaching the surface.

A recent example of volcanic cooling was the 1991 eruption of Mount Pinatubo. The eruption ejected an estimated 20 million tonnes of sulfur dioxide more than 20 km into the atmosphere. The sulfur aerosols caused cooling of an average of 0.5°C for 15 months. Changes to rainfall triggered a drought in 1992. 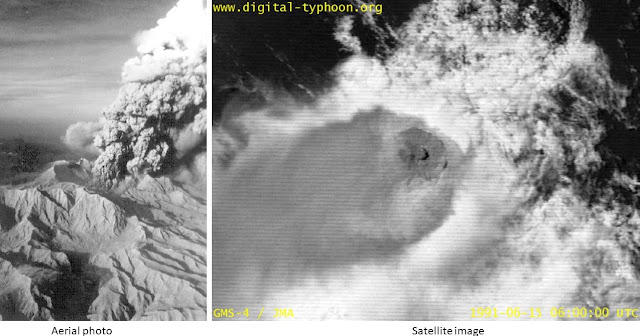 The 1991 eruption of Mt Pinatubo ejected millions of tonnes of gases into the stratosphere, cooling the entire planet. The white clouds in the satellite image are Typhoon Yunya that struck at the same time as the eruption. (Pinatubo - 1991, public domain; satellite image - Digital Typhoon 1991, Creative Commons 4.0)

Past eruptions have also cooled the globe. The 1815 eruption of Mt Tambora caused a drop of 3°C. This triggered global food shortages and was responsible for the 1816 “Year Without a Summer”. The Toba supervolcano 74 000 years ago was the most severe eruption in the past 2.5 million years. This eruption triggered a ten-year volcanic winter, reduced rain, caused severe ozone depletion and may have caused a genetic bottleneck in human evolution.

With our planet warming rapidly, some scientists have suggested that we could temporarily cool the planet with stratospheric aerosols. This approach is informed by the past eruptions that cooled the planet. Aircraft could be used to release sulfur dioxide into the atmosphere. Although climate change is an urgent problem, adding aerosols to the stratosphere may cause more problems than it solves (e.g. drought, crop failure) and does not address the underlying problem of human carbon emissions. The global political difficulties are also enormous. The current consensus is that geoengineering is very challenging, but that it may be necessary in an emergency.