Earth has a mass of 5.97 x 1024 kg – a number that is hard to comprehend. However, its mass is a mere three millionths of the mass of the Sun. Where did all this matter come from and how did it form the solar system?

The Big Bang and star stuff
The universe as we know it started 13.77 billion years ago in an event known as the Big Bang. This was a rapid expansion of space, time and matter. The first atoms were created after about a second, but it was about 400 million years before the first stars had formed from the hydrogen atoms created in the early universe.
In the centre of stars, hydrogen atoms fuse to form larger atoms of carbon, oxygen, silicon and iron. Eventually, stars stop their fusion reactions and ‘die’. Sometimes they collapse inward and explode, throwing these heavier atoms out into a great cloud called a nebula. This star stuff then clumps again and forms a new star, but with rocky matter and planets around it.
Earth and everything on it are made of matter that was formed in the Big Bang and rearranged during the lifetimes of early stars. The atoms in your body were once part of a star! 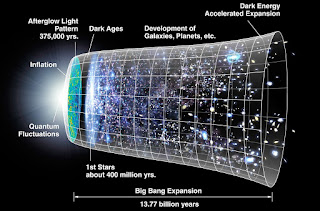 
Videos:
Four fundamental forces
Scientists have identified four basic forces that hold together the universe and explain interactions between particles. In order of strength, they are:


The strong nuclear force is incredibly strong over a very tiny distance in the nucleus of atoms. It holds quarks together, making protons and neutrons. It also helps hold the nucleus together. This force is important in the origin of our solar system because it keeps atoms together.
Electromagnetic force is strong over short distances, but very weak over long distances. The electric portion of the force explains how charged particles interact. Like charges repel and unlike ones attract. If the charged particles are not moving, we call this static electricity. You experience static electricity if you get zapped getting out of the car or after shuffling across the carpet. Static electricity helped pull charged particles of dust and gas together to form clumps of matter that eventually became part of stars and planets.
Weak nuclear force is responsible for nuclear decay (e.g. radiation). It is also vital for fusion reactions that take place in the Sun. Weak nuclear force helped form the larger atoms of star stuff that make up our planets and helps to power the Sun.
Gravity is a very weak force, but it acts over immense distances. Newton said that gravity is the attraction between two masses. When you fall, the Earth moves toward you, but to such a tiny degree that we can’t measure it. This is because the Earth has a MUCH greater mass than you. Gravity caused matter to clump in the early solar system; a process known as accretion. Gravity also causes the planets to orbit the Sun.
Einstein’s theory of general relativity gives us a different way of thinking about gravity. It suggests that gravity is because objects bend space-time. The larger the object, the greater the bending. Thus, the Sun causes a huge bend in the space-time of the solar system, attracting all objects in the solar system to the Sun. 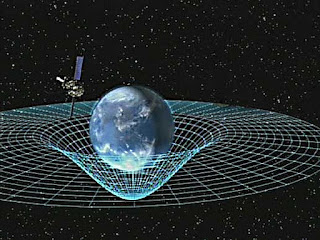