Lahar is an Indonesian word for the slurry of pyroclastic material, debris and water that flows down from a volcano. Most volcanic hazards occur during eruptions and/or close to the volcanic vent, but lahars can occur years after an eruption and flow more than 100 kilometres.

Flowing fast and fierce
A lahar starts as a mixture of pyroclastic material and water. The sediments are unsorted (not layered by size) and highly unstable. When water mixes with lahar deposits they move quickly, carrying sediments ranging from dust to boulders racing down the side of the volcano. As this slurry of material moves down the slope, it scours the land and picks up everything in its path – rocks, soil, buildings, lakes and more. Some lahars can grow to 10 times their original size as they rush down volcanic slopes. The consistency ranges from that of wet concrete (thickest) to a thinner flow, more like motor oil.
Lahars may be more than 100 m deep, depending on the amount of debris and the shape of the valley or river that they flow in. Upon reaching a flat area, they spread out and can bury towns. One of the worst lahar disasters occurred with the eruption of Nevado del Ruiz (Colombia) in 1985. More than 23,000 people were killed and the town of Armero (centre of picture) was almost obliterated. 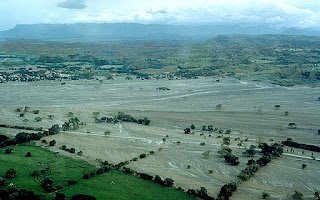 The eruption of Nevado del Ruiz on 13 November 1985, triggered lahars that had travelled 100 km within four hours. The town of Armero was consumed by this large lahar that was travelling at 60 km/hr (J Marso, USGS 1985, public domain).

Water triggers the flow
Lahars form as debris mixes with water. The flow may be triggered by melting snow and ice during an eruption. Water from a crater lake can mix with material during an eruption or years later if the wall of the lake breaks. This occurred on New Zealand’s, Ruapehu volcano and is shown well in the video link below.
Rainfall can trigger lahar flow. The photo shows a raging lahar triggered by a minor rainfall after the 1991 eruption of Mount Pinatubo. Large lahar flows occurred for the four years after the eruption and remained a hazard for decades after. 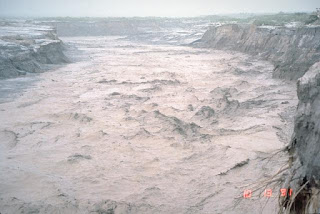 This lahar on the east side of Mount Pinatubo moved at 3-5 m/sec and carried large boulders. It was triggered by a minor rainfall (C Newhall, USGS 1991, public domain).


Living with lahars
Many areas live with the threat of lahars, but the risk can be minimised. Lahars flow through valleys and river channels. People should not build in these high-risk areas including where they empty onto flat land. The town of Armero was built on a lahar deposit from 1845 – a risky location.
Warnings of volcanic eruptions allow an educated population to seek shelter and move away from high risk areas. Communication needs to be clear and include pictures to reach children and those who do not read the local language. If local populations understand how to evacuate and take shelter, they can guide tourists.
Engineering solutions help minimise the risk of lahars in Indonesia and Japan. Structures may be used to prevent lahar flow, weaken the force, block lahars before they reach populated areas or divert lahars away from critical areas. The strategy depends upon the cost of structures, risk to populations and probability of a disaster if works are not carried out. Lahar channels on Mount Unzen direct flows away from vulnerable areas. 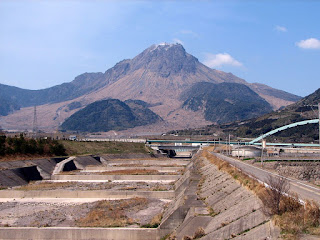 A lahar channel at the base of the Unzen volcano helps to direct flow away from populated areas. Large areas of pyroclastic and lahar flow are show as brown sediment on the side of the mountain. (Chris 73 2007, Wikimedia Creative Commons)