The question of how and where life originated has fascinated people throughout history. Scientific investigation of origins has led to several hypotheses supported by evidence. Organic molecules arise in conditions found at Earth’s surface, under the sea and even in space. However, experimentalists have not been able to create life in the lab.

Miller-Urey Experiment
In 1953, a graduate student named Stanley Miller set up a simple experiment which showed that theories about the origin of life could be tested in the lab. He mixed gases thought to be in the early atmosphere, added heat and a spark to replace lightning. No one expected anything to happen quickly, but the water turned pink in a day and dark red in a week.
Miller identified five amino acids in the red water from his experiment. Miller had created the building blocks for proteins and provided experimental evidence that conditions on early Earth could lead to molecules vital to life. Fifty years later, Miller’s original vials were analysed with more sensitive modern techniques and found to contain 14 amino acids.
As more evidence was gathered about conditions on early Earth, scientists have decided that the atmosphere had a different composition with more carbon dioxide. Updated atmospheric compositions have been tested with variations of Miller’s experiment. Even more amino acids are formed, along with other simple compounds needed for life. It seems that the building blocks of life could easily form on early Earth. 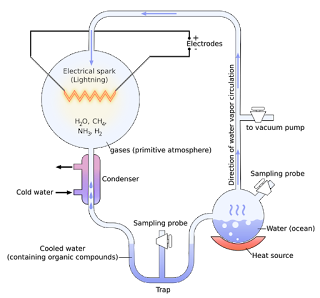 
Black smokers
Black smokers get their name from the hot mineral-rich water that billows out of deep-sea vents. These vents support ecosystems that do not need the sun and photosynthesis. Bacteria use chemosynthesis, making sugar molecules using hydrogen sulfide and other chemicals from underwater vents as a source of energy.
Observational evidence from genetics and palaeontology suggest that life may have arisen around black smokers. Genetic studies attempting to identify the most recent common ancestor of all life suggest that this was a microbe that lived at high temperatures like those around black smokers. Fossils of microbial communities in hot springs suggest that early life thrived around heat and chemical energy.
Experiments that mimic conditions around black smokers have yielded amino acids, cell membrane components and other chemicals needed for life. Space scientists hope to find simple microbial life around hydrothermal vents on Europa or Enceladus. 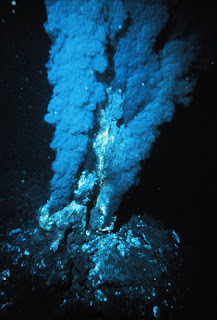 
Panspermia
The panspermia hypothesis proposes that the seeds of life are present throughout the solar system. Evidence comes from a famous meteorite that broke apart above the country town of Murchison, Victoria in 1969. Approximately 100 kg of Murchison meteorite fragments have been recovered. This carbonaceous chondrite contains more than 90 different amino acids, sugar and many other organic compounds.
A bolder version of the panspermia hypothesis is that bacteria, viruses and perhaps even eukaryotic cells were brought to Earth on comets and meteorites. Evidence for this hypothesis comes from the fact that light absorbed by interstellar dust matches that absorbed by dried E coli bacteria. The compound methyl chloride was found on comet 67P by the Rosetta mission. This compound is only made by living organisms on Earth.
One problem with the bacterial panspermia hypothesis is that it does not explain how life arose in the first place. Despite this weakness, the hypothesis is falsifiable. If we find life very different from that of Earth in places like Mars, Europa or Enceladus, this finding will disprove panspermia. 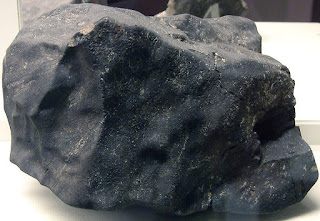 A large fragment of the Murchison meteorite. Analysis of fragments has revealed amino acids, sugar and many other molecules of life. (J St John 2005, Wikimedia Creative Commons)
Webpage:


Learn more
Read more about meteorites and the history of Earth in our blog.