Shadows are formed when something partially blocks a source of light, such as when a person stands in the sunlight. Observation and measurement of shadows has been used by scientists and artists alike for thousands of years.

Useful shadows
Measurement of shadow positions can help indicate the time of day using instruments such as sundials. You can learn more about making your own sundials in this PALMS blog post and this series of videos:


Earth’s moon does not have its own source of light, but we are able to see it because the surface is illuminated by the light of the Sun. During a lunar eclipse, the Earth passes between the Sun and the Moon and we see Earth’s shadow travelling across the Moon. 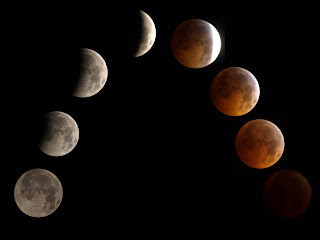 Series of photos from a lunar eclipse (Image: Wikipedia Commons)
Shadows in art
Before photographs were invented, silhouettes were a popular way for people to have their image captured. The traditional method of cutting out a person’s silhouette from a dark material and mounting it on a light-coloured background became popular in the late 18th century. 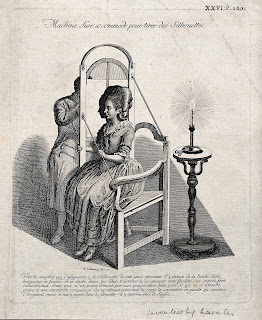 Drawing a Silhouette by Johann Rudolph Schellenberg (Image: Wikipedia Commons)
A traditional form of storytelling in several cultures is using shadow puppets. Elaborately carved puppets with moving parts are held near a piece of cloth illuminated by candles and the puppeteer moves the puppets and light sources to illustrate the story. This technique is still demonstrated today. 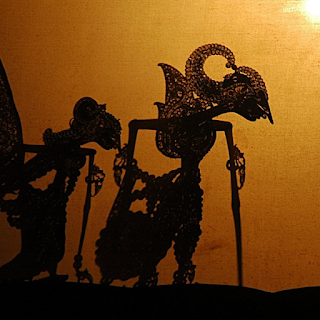 Indonesian shadow puppets (Image: Wikipedia Commons)
Observing shadows
You can have fun making some simple observations of shadows and your own piece of shadow art, as demonstrated in this PALMS video. The teacher notes to accompany the Investigating Shadows activity can be found here and the student worksheet can be found here.

More information
Some further information on shadows can be found on the following web pages:

Introduced species are those that have arrived in Australia with the help of humans. Species may be introduced for companionship, agriculture or landscaping. Many have a relatively minor effect on the Australian environment, but some introduced species endanger Australian ecosystems and primary production. Introduced species can affect the abiotic (non-living) or biotic (living) components of the environment. The most damaging species affect both.
Australia’s Most Unwanted The most unwanted invader in Australia is the European rabbit. Originally introduced for sport hunting, rabbits quickly spread across the continent. They dig burrows, causing erosion. The eroded sediments run into waterways and decrease water quality. Rabbits eat every part of the plant, including the root system. This endangers plants and native animals that are competing with rabbits for food. High numbers of rabbits cause a boom in predator numbers, adding to the danger for native herbivores. Rabbits impact more th…

It is fairly simple to demonstrate convection in water. All you need is a bowl, some warm water, ice and food colouring (see our video). Students can relate this to oceanic circulation, a major driver of the movement of heat and nutrients around the globe (see our post on this). Convection in water (R Nave, Hyperphysics, accessed 17/6/2020). Convection in air is another everyday example of this phenomena and possibly simpler to demonstrate. Think about winds or the heating of a room. Convection in air (Energy Education, accessed 17/6/2020). What is more difficult to demonstrate, and relate to, is convection in the Earth’s mantle. How can a solid convect? This puzzle leads to one of the major misconceptions in the Earth Sciences, that the mantle is liquid. It is easy to understand where the misconception comes from. Although students have observed convection in gases and liquids around them they are very unlikely to understand the convection of solids. The classic diagrams for this proc…

Being able to interpret meaningful information from datasets is a key role for scientists. It is also a very useful skill for students to be taught. This enables them to be able to conduct research themselves and draw their own conclusions. This is particularly important in a world full of ‘fake news’, where more and more people get their information from unreliable sources, such as through social media. The USGS earthquake dataset allows you to change filters to find particular magnitude earthquakes or focus on a region of the world (accessed 8/6/2020). There are numerous data sets that are freely available online from reliable sources that can be used for Earth Science projects. The United States Geological Society (USGS) has fantastic resources relating to natural hazards. As shown above, their earthquake data set is particularly useful for gaining more information about where earthquakes happen in the world. The data can be downloaded as a CSV file and plotted on Google Maps. This a…