In 1896, Svante Arrhenius calculated the contribution of carbon dioxide to the greenhouse effect and speculated on its role in climate change over geologic time. He noted that burning fossil fuels contributes carbon dioxide to the atmosphere. Arrhenius thought that the enhanced greenhouse effect might make Earth more pleasant in colder regions. However, we have learned that the consequences can be far from pleasant.

The effects of climate change
Scientists have documented steadily rising carbon dioxide levels and temperatures through modern instrumental records and by using ice cores to investigate past gas levels and temperature. Increasing levels of carbon dioxide and other greenhouse gases are enhancing the natural greenhouse effect. This has led to global warming and many otherveffects. 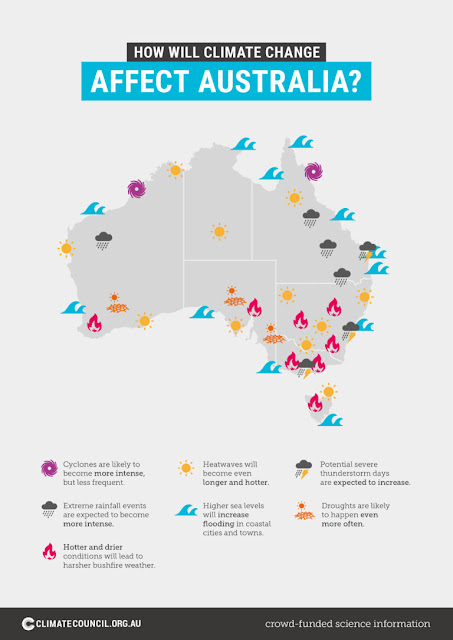 Climate change is affecting every part of Australia (Climate Council 2018, used with permission from website)

The changes to Earth’s weather systems have been called ‘weather weirding’ in recognition that once rare events are becoming more common. These include droughts, floods and intense storms and are symptoms of our changing climate. The Australian government lists many impacts of climate change including:


Mitigation
Mitigation is addressing the problem of global warming. Mitigation strategies minimise the production of greenhouse gases or capture carbon from the atmosphere. Renewable energy generation, public transport, tree planting and reducing the consumption of meat and diary are all climate mitigation strategies. Re-designing electricity production systems requires large investments from government and businesses. However, individual lifestyle changes can also help to reduce global warming.
The Intergovernmental Panel on Climate Change (IPCC) was established in 1988 to lead world action on climate change. In 2016, The Paris Agreement came into effect with the goal of keeping global temperature rise well below 2° C and eliminating net carbon emissions. The IPCC synthesises information from scientists around the world to document the effects of changing climate and strategies for mitigating climate change.

Adaptation
As we tackle the enormous task of climate mitigation, we must also adapt to a changed climate. Immediately eliminating carbon emissions would still leave us with the current greenhouse effect and altered climate. Adaptation strategies help people to live in a warmer world with more extreme weather.
An example of adapting to climate change is the installation of water tanks and water-saving appliances in homes. As fresh water becomes increasingly scarce, they decrease the need for municipal water supplies as fresh water. Adding insulation to homes keeps people more comfortable in extreme weather (adaptation) and reduces electricity consumption for heating and cooling (mitigation). Farmers plant drought-resistant crops and find ways to retain water on their land as they adapt to drying conditions. 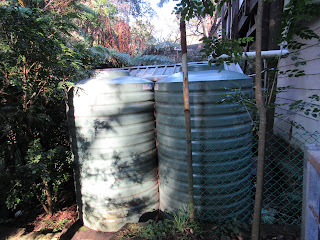 Water tanks save stormwater for use around the home. This helps reduce water demand in times of drought and is a climate change adaptation.
The Australian government discusses adaptation and mitigation strategies for housing on their Your Home website. Choices of where and how to build new homes and businesses are a major concern as we look at our warmer future.