Australia’s state capitals are all port cities and 85% of our population lives in coastal zones. This makes Australia particularly vulnerable to the impacts of climate change.

Climate change is affecting our coasts via sea level rise and more energetic storms. The sea level is constantly fluctuating due to tides. An overall average is calculated using tide gauges and satellite measurements. Both methods of measurement show an increase in sea level over time. Approximately 45% of the rise in sea level is caused by the thermal expansion of water. Warm water is less dense than cold water, so takes up more space.

The other big contributor to sea level rise is the melting of glaciers and ice caps, accounting for 40% of recent sea level rise. Contributions from the ice sheets of Greenland and Antarctica make up the rest of the rise. Water stored on land and in the ground slightly offsets the rises, but sea level is increasing by 3 mm per year this century. This is nearly double the rate of last century.

The Australian Government estimates that sea level will rise by 1.1 metres this century. A rise of 0.5 metres by 2050 would mean that events happening every 10 years now will happen every 10 days. Important coastal facilities, like the airports in Sydney and Brisbane, are likely to be inundated as sea level rises. 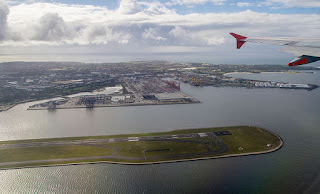 Climate change has added heat energy to global systems. On average, this means that storms now have more energy than they did in the past. Storm surge and storm tides are becoming more common. Storm surge occurs when low pressure and winds raise the sea level due to a storm. When high tide occurs at the same time as a storm surge, a storm tide causes even more massive sea level rise, often causing coastal flooding. Storm surge and tide are usually associated with East Coast Lows and cyclones. 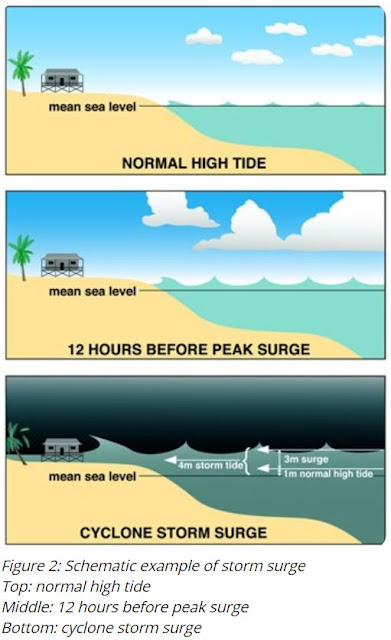 Storm surge causes a dramatic rise in sea level. It may also combine with high tide and inundate land. As the average sea level rises flooding, due to storm surge, will become more common. (Bureau of Meteorology, Storm Surge) 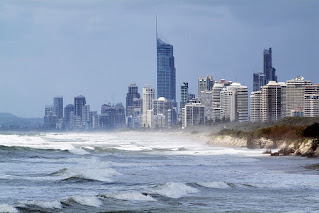 Around 63% of the Australian coast is sandy or muddy. This is important because these soft sediments are vulnerable to erosion. Structures built in areas that were sand dunes are particularly vulnerable.

An example of this can be seen at Wamberal, north of Sydney. A number of houses were built on dunes that separate Terrigal Lagoon from Wamberal Beach. Several houses were lost to storm erosion in 1974 and 1978. In 2017, a state government study looked at the feasibility of building a seawall to protect the houses. The study concluded that without a wall all properties would be affected by coastal processes in 20 years and that sea level rise would accelerate this. Construction of a seawall would lead to loss of sand on a popular public beach, not protect against sea level effects and benefit only the owners of the houses.

Storms in July 2020 caused severe coastal erosion and several Wamberal houses were deemed unsafe due to loss of foundations. The effects of storm erosion can be seen in drone footage taken after one of the two storms that affected the area. The local council has been criticised for allowing construction in the area after the storms in the 1970s. New developments are unlikely to be approved after the 2020 events. Homes in coastal areas at risk are not insured for damage caused by the ocean, as this is so common and a foreseeable consequence of building near the shore.

Governments and insurance companies can calculate the cost of rising sea level on structures and economies, but it is more difficult to put a value on coastal ecosystems. Climate change has many effects on ecosystems:

Coastal ecosystems are important to humans. Mangroves are not only nurseries for baby fish, they also sequester carbon 40 times faster than forests. Damaging these ‘blue carbon’ ecosystems can release tonnes of ancient carbon stores back into the atmosphere. We may not have a dollar value for the natural areas of Australia’s coastlines, but this does not diminish their importance. 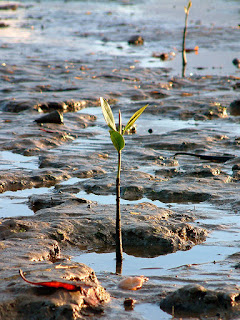 This mangrove seedling in Cairns is a vital part of the ‘blue carbon’ coastal ecosystem that sequesters carbon 40 times faster than a terrestrial forest. (G Blanchard 2003, Creative Commons)

Explore the effects of climate change on our coasts: