Magma is molten rock from Earth’s mantle, but the mantle is solid rock. What causes the mantle to melt?

The solid mantle (A)

Under normal conditions, the temperature inside Earth’s upper mantle (the geotherm) is lower than the temperature required to start melting the rock (the solidus). This is shown in A of the diagram below. The geotherm and solidus lines do not cross each other, so the mantle rock remains solid. To melt the mantle, there must be a change in the pressure, temperature or melting point of the rock. 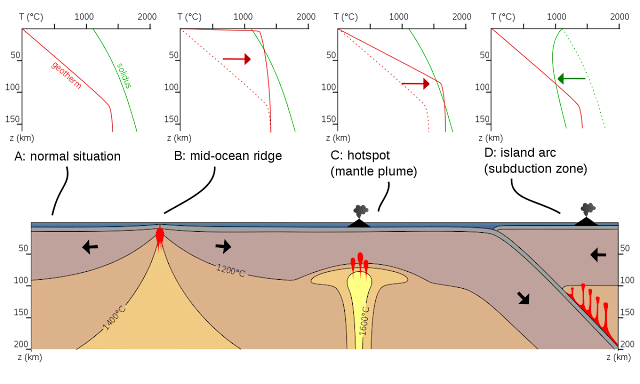 Diagram of physical processes in Earth’s upper mantle that lead to magma generation. A-D are different plate tectonic settings. The graphs show the geotherm in red (temperature curve inside the Earth) and the solidus in green (temperature where rock starts to melt). When the curves cross each other, partial melting of mantle rocks occurs (Woudloper 2010, Creative Commons).

When pressure in the mantle is lowered, hotter mantle rock rises closer to the surface. This causes melting of mantle rock at shallower depths. Decompression melting occurs at mid-ocean ridges, as shown in B of the diagram.

At Earth’s surface, we can see the effect of decompression on the boiling point of water. As you travel up a mountain, the air pressure decreases and liquids boil or evaporate at lower temperatures. This means that foods must be cooked longer and recipes adjusted – a challenge for food safety. This effect is different from melting of mantle rock. As we move up a mountain, liquids boil at a lower temperature. However, mantle decompression raises the temperature near the surface (moves the geotherm) and rock melts at its normal temperature (solidus).

Where do the water and carbon dioxide come from? Water is bound in ’hydrate’ minerals and occurs in pockets of water that have been trapped in sedimentary rocks on the ocean floor. The intense pressure and heat of the mantle causes the release of volatiles such as water, carbon dioxide and hydrogen sulfide. These lower the melting point of minerals in the mantle by several hundred degrees. Volatiles become gas as magma nears the surface, resulting in explosive volcanic eruptions.