Earth is sometimes referred to as the “Blue Planet” because 71% of its surface is covered by water. With so much water, why do we worry about shortages? 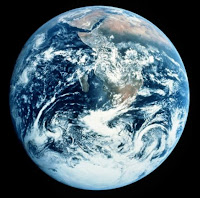 From space, the Earth looks blue due to surface water

Water is not naturally salty, so where did the salt in the oceans come from?

This salt has accumulated over the course of more than four billion years from the chemical weathering of rock.

The oceans are 3.5% salt. Most salt is from the weathering of rocks on land, but deep-sea vents also release ions into the water. There is so much salt in the oceans that if you removed it and spread it over the land, it would be 166 metres thick. That is the height of a 40-story building! 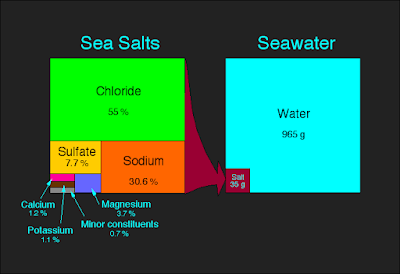 The main ocean salt is sodium chloride (which we call table salt), but there are many other ions dissolved in sea water (H Grobe 2000, Creative Commons)

Most of Earth’s fresh water is frozen in the polar ice caps, sea ice, snow and glaciers. We refer to this frozen water as the cryosphere. Seasonal melting of glaciers and snow provides vital water for many rivers. However, as Earth warms, the cryosphere is shrinking and these freshwater reserves are flowing into the ocean. Global sea level is rising at an ever-increasing rate due to global warming. The 2019 IPCC report summarises the scientific evidence for these changes and estimates that sea level could rise 38 cm by 2100. 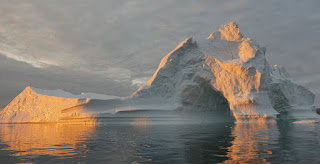 Fresh water in this iceberg that has broken off Greenland’s ice sheet will be added to the oceans (NASA, 2015, public domain)

Water for Plants and Animals

Plants may access very shallow groundwater but tend to rely upon water trapped in the pore spaces of soil. Some animals are able to get all of their water from food, but most rely upon the scarcest type of water – that in lakes, swamps and rivers. Thus, the plants and animals on land rely on less than 1% of Earth’s water. 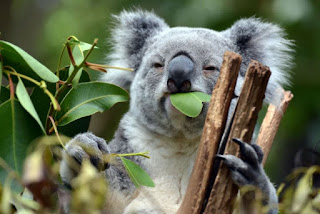 Koalas are among the specially adapted animals that rarely need to drink. They get almost all of their water from gum leaves.

Although we tend to think of lakes as fresh water, this is not always the case. Australia’s famous Kati Thanda-Lake Eyre is a well-known salt-lake that covers up to 9500 km2 when it is full. 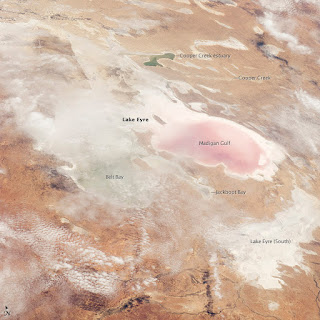 Kati Thanda-Lake Eyre was flooded at the time of this 2011 image. The pink water of Madigan Gulf is caused by halophile (salt-loving) bacteria. (NASA’s Earth Observatory 2011, public domain)