The amount of energy Earth receives from the Sun varies in cycles, as Earth’s orbit changes slightly, in a predictable way. This has led to a long-term cycle, triggering the start and end of ice ages every 41 000 – 100 000 years. These variations are named Milankovitch cycles after the Serbian scientist who proposed that these changes in orbit drive long term climate variation.

Earth’s Changing Path Around the Sun

Eccentricity: The shape of Earth’s orbit around the Sun changes in 100 000-year cycles. The orbit changes from being a nearly perfect circle to a slight ellipse. This variation affects the distance between Earth and the Sun and is caused mainly by the gravitational pull of Jupiter and Saturn. During times when the orbit is more eccentric (more elliptical), seasons are slightly different lengths with longer winters in the southern hemisphere. Right now, the Earth’s orbit is nearly circular.

Obliquity: Earth’s axis of rotation is tilted as it goes around the Sun. When the southern hemisphere is tilted toward the Sun, it is summer in Australia; when tilted away, it is winter. This tilt varies over time in cycles of 41 000 years. A greater tilt leads to more extreme seasons, especially in polar regions. Earth’s present tilt is about halfway between its extremes and is slowly decreasing.

Precession: Earth’s axis is not only tilted (obliquity), but it also wobbles, relative to the fixed position of the stars, in a cycle lasting 23 000 years. Precession makes the seasons more extreme in one hemisphere and less extreme in the other. Earth’s current wobble brings Australia closer to the Sun in summer, making southern summers hotter and northern seasons more moderate. 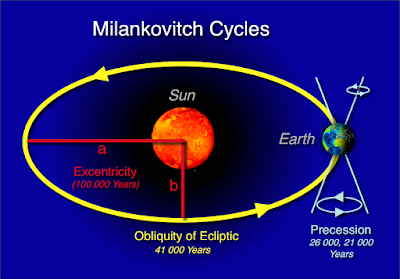 Milankovitch calculated that ice ages would occur every 41 000 years (due to obliquity). Palaeoclimatic records show that this was the case between one and three million years ago. However, around 800 000 years ago the cycle lengthened to 100 000 years, matching Earth’s eccentricity and accentuation of precession.

A 2017 study has finally explained this based on both overall climate and precession leading to asymmetry of sea ice growth. In the relatively cooler climate of the past 1 million years, precession has allowed sea ice to grow faster in one hemisphere than the other. Ice reflects solar radiation, driving a feedback loop that can create an ice age. Between one and three million years ago, Earth’s climate was warmer, so there was less overall sea ice and climate fluctuations followed the cycle of obliquity. 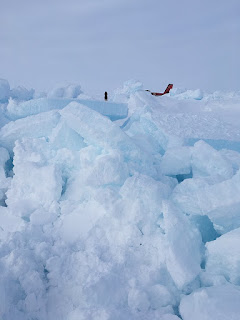 Milankovitch Cycles are Not Responsible for Our Current Climate Change

NASA satellites also show that solar radiation has decreased over the past 40 years.

Milankovitch cycles are also just one of the factors contributing to geological climate change. The extent of ice sheets, greenhouse gas levels and the plate tectonic supercycle all influence climate.

Finally, Earth is in an interglacial period. If there were no human influences on our climate, Earth should be continuing the long-term cooling trend that began 6000 years ago. Instead, the climate is rapidly warming in conjunction with rapidly rising greenhouse gas levels. 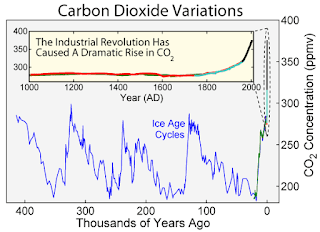 This graph shows variations in the concentration of carbon dioxide over the last 400 000 years. Before 1900, the changes relate to Milankovitch Cycles. The current rise is largely due to burning fossil fuels. (RA Rohde, Global Warming Art, Creative Commons)