Extreme weather events are the most common natural disasters in Australia and the entire world. Due to climate change, these events are becoming more common and the costs are rising.

How common are weather disasters?

Although the COVID-19 pandemic held the world’s attention in 2020 (with good reason), more than 100 natural disasters affecting more than 50 million people occurred from March – September 2020. The US National Centers for Environmental Information tracks weather and climate disasters that have overall damages of at least US$1 billion. The number of events has been rising every decade, as shown in the graph. 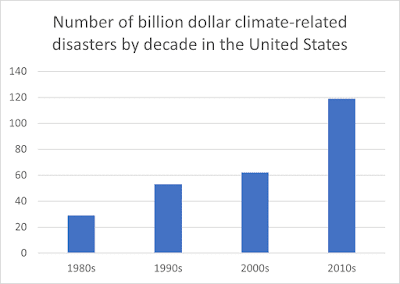 The frequency and damage caused by disasters is steadily rising, as shown by this graph from the United States.

Worldwide, there were 308 natural disasters in 2019. More than three-quarters of these were climate or weather-related: 127 floods, 59 storms, 25 landslides, 8 wildfires, 10 extreme heatwaves and 8 droughts. Some of the 36 disease outbreaks can also be linked to climate.

We know that global temperature is rising, but have you ever thought about exactly what that means? Temperature is a measure of the average kinetic energy of particles. Air and sea temperatures are rising because there is more energy in the Earth system. This energy fuels extreme weather events. A 2020 study found that tropical cyclones are getting stronger. These findings match projections from computer models of a warming world. More heat leads to more evaporation (adding more rain to storms) and higher wind speeds. Rising sea level means that more locations are experiencing storm surge and flooding. Storm surge from 2020 cyclone Amphan, reached more than 16 km inland in India and Bangladesh.

More energy in Earth systems means that we not only have more severe storms, but also increased heatwaves and drought. Drying increases the fuel load and contributes to bushfires, such as Australia’s Black Summer of 2019-2020 and the California wildfires of 2017 and 2018.

Counting the cost of climate-related disasters

In 2018, natural disasters cost the world US$160 billion, with hurricanes (Michael and Florence) and typhoons (Jebi, Mangkhut and Trami) the most costly disasters at a total of US$57 billion. The California wildfires cost US$24 billion. Financial costs are concentrated in affluent countries, but human costs are greatest in developing countries.

In 2020, severe floods affected 760 000 people in West and Central Africa. Cyclone Amphan killed more than 85 people in India and Bangladesh. Bangladesh had one of the worst flood years in history with more than a quarter of the country under water and 5 million people affected. Major floods and storms were some of the worst disasters affecting tens of millions of people in India, Bangladesh, Sri Lanka, China, Ethiopia, Somalia, Kenya and Uganda. Droughts affected more than 4 million people in Lesotho and Zimbabwe. Locust swarms in East Africa, India and Asia were also linked to climate change. 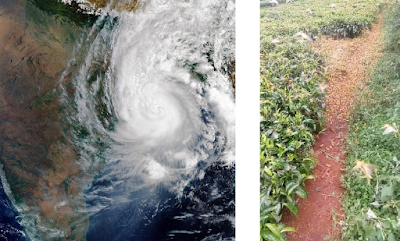