Finding geological resources is both time-consuming and costly, as described in this AusEarthEd blog about mining exploration. Drilling is a vital component of exploration, as it allows geologists to see exactly what lies underground and to sample the mineral content of key rock units. After drilling, the land must be rehabilitated. This process is illustrated with an example from McPhillamys Gold Project in central western New South Wales.

Exploration drillholes are not particularly large, but the drilling process can have impacts on land use and the local environment. Before drilling, companies must apply for an Exploration Licence (EL). Access to the land to be explored must be negotiated with the landholder of the property prior to any work commencing. This first point of contact is vital in ensuring a good working relationship is formed between the company and the landholder.

Regis Resources wanted to conduct exploration drilling, to determine the extent of the deposit at their McPhillamys Gold Project. When applying to the NSW Resources Regulator for permission to drill, the company had to analyse the potential for environmental disturbance and agricultural impact, as well as estimate the cost of rehabilitation. As part of the application process, they detailed the locations, impact areas, ground disturbance and costs of the drilling.

Typically, the Environmental Branch of the Resources Regulator will impose special conditions on the activity approval, which must be adhered to. Any breach of these conditions is an offence under the Mining Act and can result in serious penalties. The Resources Regulator also requires a security deposit against the approval to drill, this is to cover the costs of rehabilitation should a company fail to do so. This deposit is returned to the company when the rehabilitation is completed.

All areas to be drilled, or that will be disturbed by drilling, are photographed before works commence. At McPhillamys these locations were pegged and then photographed looking west (for consistency).

Topsoil is removed and set aside before drill pads are constructed. The footprint of the exploration drill pads at McPhillamys was approximately 100m2. A drill pad has a level base for the drill rig and rod sloop (see image below) and a sump for water.

Drill holes may extend more than a kilometre underground. You can see the process in the GeologyUpSkill video How Diamond Drill Rigs Work. Water and polymers are used to cool and lubricate the diamond drill, and the fluid and waste are stored in a sump. Regis Resources hired a liquid waste company to remove the waste from sumps at the McPhillamys project, for offsite treatment at an approved facility.

Rehabilitation after drilling is more than just filling in holes, it is progressive, to ensure the land is returned to its former use. At the McPhillamys Gold Project the compacted drill pads were reshaped using displaced materials and were then deep ripped (to 50 cm), to allow water and plant roots to move into the subsurface. The topsoil was then replaced, and the area was seeded with the pasture seed mix used in the grazing area around the pads.

Companies must provide monitoring photos after completion to prove the rehabilitation of the site. At McPhillamys this was done when the initial rehabilitation works were completed and then at 3, 6 and 12 months later. During this time weed spraying and maintenance was also conducted.

A year after drilling, when the area was back to its former use, grazing, McPhillamys successfully applied for return of their security deposit. This application included maps, the rehabilitation photos, documentation of the rehabilitation undertaken and a statement from the landowner that they were happy with the rehabilitation that had taken place. 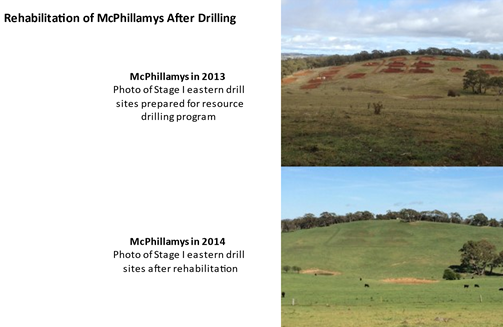 One year after the initial drilling, pasture has been re-established on the former drill pads.