My Country, by Dorothea Mackellar, describes Australia’s unpredictable cycle of drought and flooding rains. In the north of Australia, rain occurs in a monsoonal pattern with a wet summer and dry winter. In the southern half, rain is more frequent in the cooler months. However, Australian rainfall is notoriously variable due to fluctuations of ENSO and the Indian Ocean Dipole. This variability naturally leads to flooding. Human impacts on the water cycle can make flooding worse or dampen its effects. Floods cost Australia nearly a billion dollars a year, so understanding them is vital.

Flooding of the Macquarie River in Tasmania leaves a driver stranded.

A flood occurs when water covers a normally dry area of land. This is a natural process. Floodplains are flat stretches of land next to rivers that are inundated regularly. These have fertile soil for farming and provide important habitat and breeding grounds for water birds. Floodplains of the Murray-Darling Basin provide some of Australia’s most important agricultural areas. 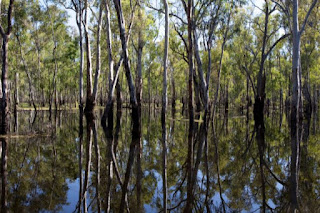 Flooding of inland areas occurs due to heavy rainfall. The main drivers of increased rain are the La Niña portion of ENSO and a negative Indian Ocean Dipole. Flooding may also occur due to significant storm events, such as an East Coast Low or cyclone. Storm surge, due to a cyclone, can travel kilometres inland. 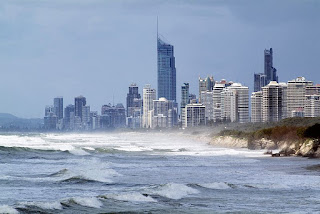 There are many ways in which humans may increase or decrease the likelihood of floods.

Land use affects the amount of runoff and, thus, the risk of flooding. Dense natural vegetation slows the fall and flow of rain. This allows the water to infiltrate into soil rather than running off into local waterways. Land clearing for agriculture and urban areas decreases natural infiltration. Water runs off into local waterways that may flood due to the sudden increase in water, particularly in urban areas with many sealed surfaces and large volumes of stormwater. 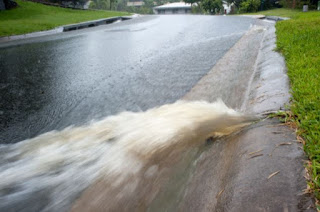 Stormwater from the roofs of houses is directed onto sealed roads and into local waterways.

Dams change the natural flow of water and store water in one area. Water may build up behind a dam rather than spreading out along floodplains. Releases and water spilling over dam walls may flood downstream areas. Water managers can plan for rainy seasons and increase the outflow of dams, but sudden storms that dump large volumes of water will require larger releases and may cause dams to overflow. 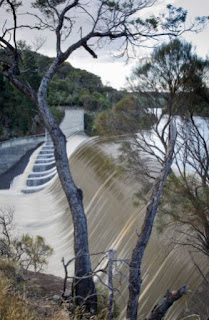 Water spills over the Trevallyn Dam in Launceston

Anthropogenic climate change makes the risk of flooding greater because warmer air can hold more water, particularly over the ocean. Rainfall extremes (drought and flood) are increasing. The effect is clearer in the northern hemisphere where the rainfall is more predictable than in Australia. In addition to changes in rainfall, both thermal expansion and melting ice are causing sea level to rise, increasing the frequency and extent of coastal flooding.

We know that sea level is rising and that some areas are prone to flooding. In a warming world, it is important to plan for these events. Houses in some coastal areas and on floodplains have become uninsurable as flooding becomes a certainty rather than a risk. The government has announced a new reinsurance pool as a short-term solution, but urban planning needs to take these factors into account when building new houses and infrastructure. 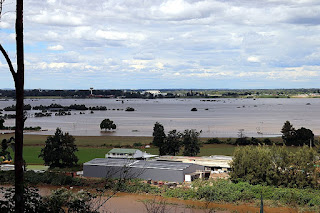 An increase in the height of Warragamba dam was proposed long before the March 2021 floods in Sydney, but these floods brought the proposal to a head. Although originally designed as a reservoir, the dam height increase is to reduce flooding in the Hawkesbury-Nepean Valley. The proposal is controversial because heavy rain would flood approximately 300 hectares of the Blue Mountains world heritage area. The proposed increase in dam height may also fail to prevent flooding in the Sackville Bathtub area which receives about half of its input from sources other than the Warragamba dam flow. This highlights the fact that there are no easy solutions to floods in Australia.