Zircon crystals survive the processes of erosion, transport and metamorphism, preserving a record of the geological past. They truly last forever!

Oldest minerals in the solar system

The chemical formula for zircon is ZrSiO4. Zirconium (Zr) atoms are occasionally replaced by uranium (U) as the mineral forms. Uranium decays to lead (Pb) over time. By examining the ratio of uranium to lead, scientists can determine how old the zircon crystal is.

Although both uranium and lead are present in lava, only uranium fits into the zircon structure. Over time, some of the uranium decays to lead. (KelvinW 344 2010, public domain)

The oxygen atoms in zircon can also provide evidence of the past. The ratio of Oxygen 18 to Oxygen 16 provides clues about the temperature of early Earth. Zircons from the Archaean suggest that early Earth was cool enough for liquid water to exist.

Clues to the history of life can also be contained within zircons. Tiny grains of graphite in a 4.1 billion-year-old zircon shows a carbon isotope signature suggesting that life had arisen at this very early time (it should be noted, however, that this was a single sample). 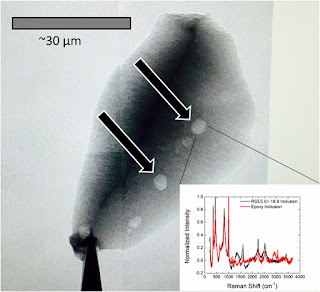 The inclusion of relatively high concentrations of aluminium in zircons is used as a marker for the start of plate tectonics 3.6 billion years ago. Aluminium is included in zircons when rocks melt deep beneath the Earth’s surface at subduction zones. Thus, zircons high in aluminium indicate the presence of modern tectonics.

Zircon is usually reddish brown but can range in colour from clear to purplish red to blue. Zircon has been popular as a gemstone for centuries due to its variety of colours and high refraction. Its sparkle is similar to diamond, but zircon is softer and has double refraction. Heat treatment is often used to create blue and green colours. Zircons are mentioned in the Bible and a Hindu legend tells of presenting green zircon leaves as a gift to a god.

Zircon (ZrSiO4) should not be confused with Cubic Zirconia (ZrO2), a colourless synthetic mineral used as a diamond substitute.

Zircon is truly an amazing mineral that not only has a pleasing appearance but tells us much about the history of Earth.