Drought is a regular hazard in Australia, the driest inhabited continent. Seventy percent of the mainland receives <500 mm of rain each year, with more than a third effectively classified as desert. About two thirds of Australia’s water use is for agriculture, so during times of drought food production drops and prices rise. We know that Australia has been gradually drying over time, but are humans affecting the frequency or severity of drought? 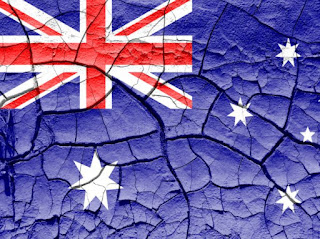 The Indian Ocean Dipole (IOD) and El Niño Southern Oscillation (ENSO) are major drivers of drought in Australia. Both positive IOD and El Niño ENSO pattern are caused when winds blow away from Australia. This shifts rainfall away and results in higher temperatures as the path of weather systems changes.

In Eastern Australia, nine of the ten driest winter-spring periods up to 2020 were associated with El Niño events. The positive IOD strongly affects central and southern Australia and is likely to coincide with El Niño. The drought of 2019 was unusual, in that it occurred with an extreme positive IOD and neutral ENSO. 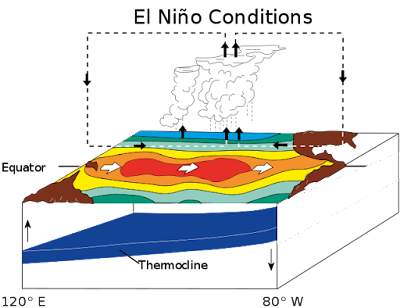 In the El Niño state, winds blow warm water to the central and eastern Pacific, moving rainfall away from Australia (public domain).

Global studies indicate that humans have been increasing the frequency of drought, for at least 100 years. The main causes are greenhouse gases and atmospheric particles. The ways we manage water can also affect drought. 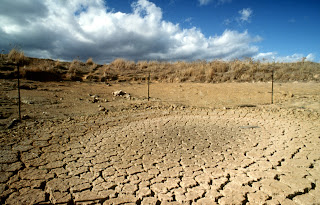 Human- induced climate change is making natural weather oscillations more intense. Researchers studying extreme IOD events found four events in the past 60 years and only six events in the 440 years before that. Climate models indicate that extreme IOD events will triple due to global warming. Extreme ENSO events are also expected to become twice as common by the end of the century.

Water over-use and poor management exacerbate the effects of natural drying. Lakes shrink as their inputs are diverted for agriculture. A well-known case is that of Lake Urmia in Iran. Once the world’s second largest saltwater lake, it decreased in size by 80% between 2009 and 2015 as freshwater inputs were diverted for agriculture. The dry salt left behind leads to salt storms that threaten the health of humans and their crops in the surrounding area. 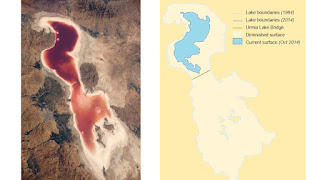 Lake Urmia is now a small fraction of its former size due to the construction of dams and use of freshwater inputs for agriculture. (L – NASA 2017 public domain, R – A Kagan 2014, Creative Commons 4.0)