Bushfires are a natural event in Australia and ecosystems have evolved with fire. Small fires help renew plant life and create biodiversity. Large, hot fires are disastrous, sterilising the soil and destroying thousands of hectares of vegetation. The Eastern Australian bushfires of 2019-2020 lasted 240 days from July 2019 to March 2020. The 11 774 fires in NSW destroyed thousands of homes, burned millions of hectares of land, killed more than a billion animals, and caused the death of 26 people. 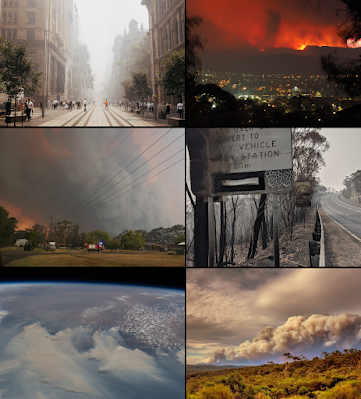 Lightning ignites natural bushfires. The size and intensity of the fire depends on fuel load, vegetation, wind speed, temperature, humidity, and topography. In times of drought, fires are more likely, because both air and vegetation are dry. Prolonged drought leads to plant death and more fuel for larger fires. 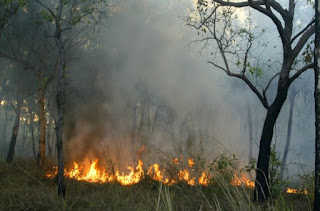 Aboriginal Australians use fire to care for country. Strategic burning is carried out with consideration for the lifecycles of the animals and plants in each ecosystem. Fires are cooler, smaller and in a mosaic pattern. This reduces fuel, creates natural fire breaks, and increases biodiversity. Cultural burning reduces the risk of disastrous bushfires. 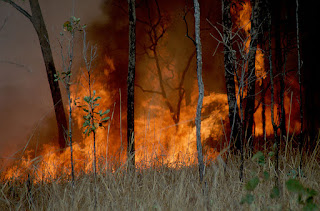 Hazard reduction burning carried out by fire services aims to reduce fuel load, thereby limiting the spread of bushfire and making suppression easier. Land managers may clear dense vegetation and create fire breaks to limit the intensity and spread of fire. Targeted grazing may also be used to reduce fuel load. When fires have started, fire fighters use a combination of back burning and clearing to create fire breaks, with ground-based and aerial fire suppression.

Whilst humans may take action to prevent fire disasters, they can also cause them by igniting fires or creating hazardous fire conditions. Although arsonists deliberately light fires, few of the disastrous bushfires in Australia (about 1%) have been caused by arson. Humans accidentally start fires with discarded cigarettes, poorly managed burn-offs, and campfires.