Australia is the lowest, flattest continent. For this reason, landslides are a relatively minor hazard compared to fire and flood. Despite this, there were 114 landslides causing injury or death between 1842 and 2011. Australia’s two most deadly landslides were the Briseis Dam Disaster in Tasmania in 1929 and the Thredbo landslide in 1997. 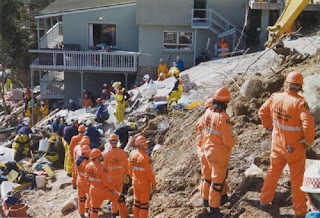 SES volunteers assist at the Thredbo landslide in 1997 which killed 18 people (NSW SES, CC BY 2.5)

Landslides are caused when soil and rock on a hill moves downward due to gravity. They range in size from a single rock to thousands of cubic metres of material in a debris flow. Landslides often involve water as saturated sediments fail and begin slipping or heavy water flows cut into cliffs and banks. 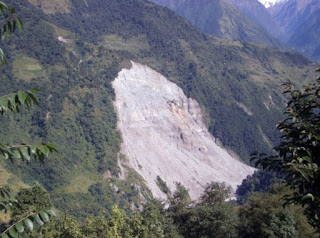 Steep terrain, like this mountainside in Nepal, is more vulnerable to landslides.

Geohazards can trigger landslides. Earthquakes may destabilise rocks and sediments, allowing slippage. Migrating magma may increase the angle of the flank of a volcano, triggering a landslide. The largest landslide in recorded history occurred with the eruption of Mount St Helens. A magnitude 5+ earthquake triggered a debris flow, which removed pressure on the bulging north flank and triggered an explosive hydrothermal blast through the landslide. The landslide displaced approximately 2.5 km3 of debris. 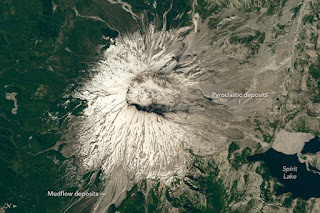 Mount St Helens 37 years after the volcanic eruption. The north flank (right side of image) experienced a huge landslide that was then covered by pyroclastic deposits. This photo was taken by an astronaut on the International Space Station. (NASA Earth Observatory 2017, public domain)

Land clearing removes deep tree roots that help to anchor soil and rocks in place. Steeply terraced rice fields are particularly at risk due to lack of deep vegetation and frequent saturation of the ground. Planting of deep-rooted vegetation can reduce landslide risk. 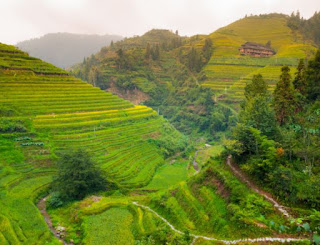 Steep hillsides terraced for rice are vulnerable to landslide due to land clearing, with the flooding of rice fields adding to the danger of mass flow.

Construction of roads, railways and buildings can change slopes and make them more vulnerable to landslide. Proper engineering of these structures and reinforcement of steep hillsides may reduce landslide risk. 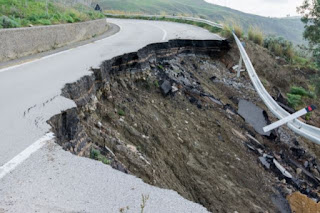 Roads on steep terrain are vulnerable to landslides, particularly if there is high rainfall. 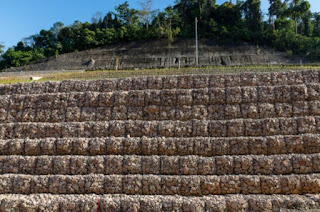 Human interventions such as planting trees and reinforcing steep slopes (with rock-filled gabions in this example) help to reduce the risk of landslide.

Mining activities require the movement of large amounts of rock. Careful construction of mine pits and waste dumps is vital for preventing landslides. Vibrations from explosives and heavy machinery around mines can trigger landslides if the landforms are not properly designed. 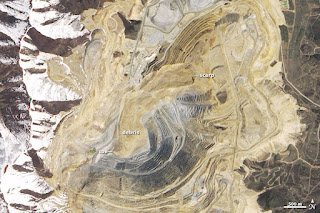 Human alteration of natural waterways or leaking pipes can cause waterlogging and make an area prone to landslide. The Thredbo landslide was caused by use of a poorly built road and water leakage in a pipe under the road for at least two months before the landslide. Paving or reinforcing areas that receive heavy runoff (e.g., stormwater channels) can reduce the risk of landslide due to water. Preserving deep-rooted trees along waterways also helps to stabilise banks. 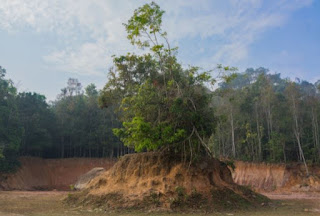 This clump of trees preserved the surrounding soil during a small landslide triggered by flooding.