Australians tend to view earthquakes as a hazard more relevant to our neighbours in Indonesia and New Zealand, which sit on active plate boundaries. However, Australia experiences about 100 earthquakes of magnitude 3 or greater every year. The recent magnitude 5.8 earthquake in Victoria was felt as far away as Sydney and Launceston. Should we be more prepared for ground movement? What hazards are associated with earthquakes?

Instruments detect about 13 000 earthquakes every year around the globe. Most of these are very low in magnitude and are not felt by people. Earthquakes of magnitude 5 or more are potentially damaging. Australia’s most costly earthquake occurred in Newcastle on 28 December 1989. A magnitude 5.4 earthquake claimed 13 lives and damaged more than 50 000 buildings. 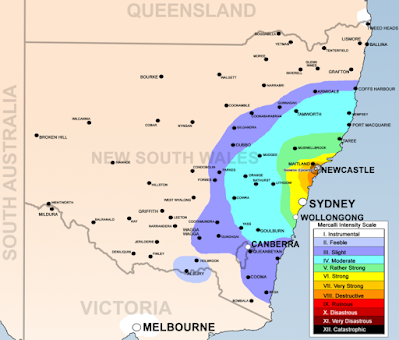 The 1989 Newcastle earthquake was felt from Coffs Harbour to Bega. Shaking was particularly damaging in the soft sediments along the Hunter River. (Bidgee 2008, Creative Commons 3.0)

Earthquake magnitude was first measured with seismographs on the Richter Scale. It is determined using the logarithm of amplitude waves. Moment Magnitude is based on physical properties, such as the distance of movement and rock affected. Each increase of one unit in magnitude represents 32 times more energy release. Learn more from the USGS.

The Richter scale (ML) was developed in 1935 and is now only used for small, local earthquakes. It has been replaced by the more accurate moment magnitude (Mw) scale. (BJ Burger 2020, Creative Commons 4.0)

An earthquake causes sudden movement of the ground. This motion alone is not particularly dangerous, but its effect on buildings, hillsides and the ocean floor can be deadly.

Building collapse occurs for several reasons. The earthquake may be near the resonant frequency of the building, causing it to shake more violently than others. Or the materials may be rigid or prone to breakage, like masonry. Note: building materials that can bend and sway (wood, metal) are more likely to withstand ground movement. 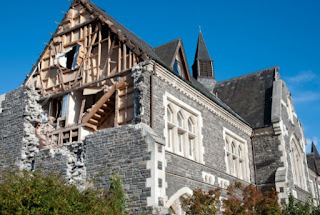 The wooden portion of this building remained intact, but masonry crumbled during the 2011 Christchurch earthquake.

Landslides occur when shaking destabilises materials that make up a slope. The earth materials move due to gravity. This may occur both on land and underwater. Underwater landslides may cause tsunamis like that in Palu in 2018. 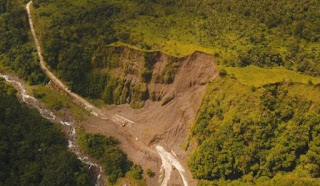 An earthquake in the Philippines triggered this landslide. The steep slope made the mountain more vulnerable to collapse.

Tsunami is the deadliest and most far-reaching hazard associated with earthquakes. The most devastating tsunami was that on Boxing Day 2004 near Sumatra. More than 230 000 people in 14 countries were killed and many more were injured or left homeless. The tsunami was caused by a magnitude 9.1 earthquake that moved the seabed several metres, displacing hundreds of kilometres of sea water. Wave height rose to 30 metres in shallow water near Aceh Indonesia. Effects were seen as far away as Antarctica. 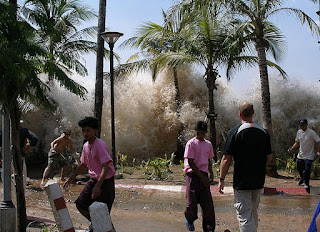 Liquefaction occurs in water-saturated loose sediments. You can learn more in the AusEarthEd blog on liquefaction.