The theory of plate tectonics is an important scientific theory that was proposed about 50 years ago. Like all scientific theories, it is constantly being tested and refined. This blog post provides some updates to our understanding based on recent research.

Fossils of terrestrial organisms helped Wegener to put together the puzzle of Pangea (USGS, public domain)

Seafloor mapping, convection currents in the mantle and magnetic reversals (measurable in seafloor rocks) provided evidence for forces strong enough to move continents. This evidence of forces and continental movement were combined into the modern theory of plate tectonics. The theory explains how new ocean crust is produced at mid-ocean ridges, while being subducted at deep ocean trenches. The less dense continental crust is moved about by expansion and contraction of ocean basins, as well as being torn apart by rift zones. 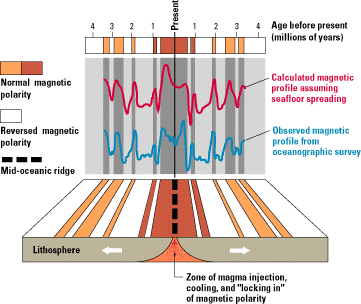 Most mid-ocean ridge studies indicate that new crust is produced equally on both sides for both fast- and slow-spreading ridges. However, some ridges spread very slowly and behave differently. At ultraslow-spreading ridges, mantle rock is being brought to the surface on the faster side of the fault which is termed a detachment fault by some researchers. Seawater sinks into cracks around the ridge and reacts with mantle olivine to form serpentine. Serpentine allows faults to move more quickly, increasing slippage and olivine uplift in a positive feedback loop. The seismic appearance and rock profiles around ultra-slow ridges are changing ideas about the crust-mantle boundary, as well as mantle composition. 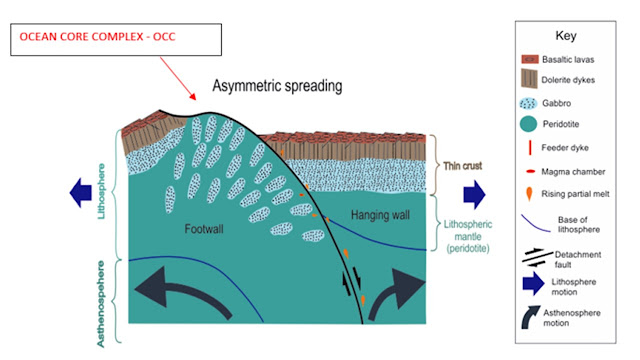 At ultraslow-spreading ridges, one side moves more quickly than the other, bringing up peridotite mantle rock. (R Searle 2017, Teachers At Sea blog)

The exact pattern of convection in the mantle is still debated. Simple diagrams like that below provide a basic summary of patterns. However, this is an area of much research. Isotopic data (Barry et al. 2017) suggests that the whole-mantle model may be the most accurate, with convection cycles taking 100 million years or more. However, recent computer models (Cameri 2018) show greater activity in the upper mantle overlying larger mantle upwelling. 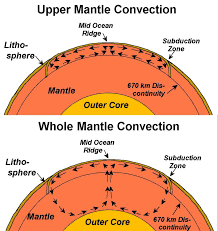 Convection may occur in the upper mantle (top), whole mantle (bottom) or separately in both the upper and lower mantle.

Our original understanding of plate tectonics suggests that continental crust does not subduct because of its low density. Instead, colliding continents are folded and pushed up into mountain ranges that eventually weather and erode. This idea has been challenged by several lines of evidence (Ducea 2016).

It has long been recognised that oceanic plates subduct (A), but recent research has provided many lines of evidence for continental subduction (B). Each type of subduction leaves distinctive evidence in the overlying crust (C). (LQ Dai, ZF Zhao, YF Zheng (2015). Tectonic development from oceanic subduction to continental collision: Geochemical evidence from postcollisional mafic rocks in the Hong’an-Dabie orogens. Gondwana Research 27(3): 1236-1254, https://doi.org/10.1016/j.gr.2013.12.005)