We can read evidence of the past from rocks in many ways. Fossils tell us about the history of life and different rock types provide evidence of past tectonic activity. We can learn about past climate from rocks.

Evidence in the rocks

There are many ways that evidence of past climate can be preserved in sedimentary rocks for millions of years. An obvious indicator is the fossil record. We understand the types of animals and plants that live in hot and cold environments today. Palaeontologists look for similar species and/or adaptations in the fossil record. Glossopteris fossils in Antarctica tell us that the continent was once much warmer, just as coral and crocodile fossils in the Arctic Circle suggest that these areas were once much warmer. 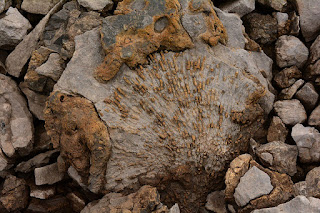 This coral fossil is from a mountain in Alaska, evidence of major changes in the environment over time (P Woelber 2013, Creative Commons 3.0).

Oxygen isotopes preserved in marine sediments, foraminifera fossils, corals and even conodonts (teeth of an ancient jawless fish) allow scientists to calculate the seawater temperature at the time these fossils lived and died. These measurements are correlated with fossils from land to gain a more complete picture of climate in the past.

Evidence from the type of rock

Different types of rock can also tell us about climate. Coal is formed in wet conditions that favour the growth of lush vegetation. Areas of the Sydney Basin that were covered in Permian forests and swamps have large deposits of coal.

Another indicator of warm, wet weather is laterite. Laterites (including bauxite) are formed when heavy tropical rain causes intense weathering of rock and soil. Some materials are dissolved in the water and washed out of the rock (such as many silicates), whilst metals, such as aluminium and iron are left behind. 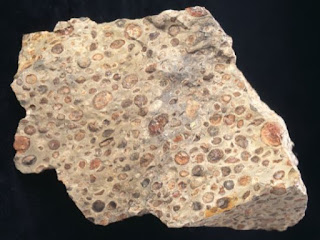 This bauxite has many pisolites, spherical collections of aluminium oxide. These are the result of warm and very wet conditions. 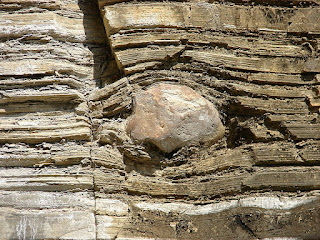 This quartzite drop stone is clearly different from the fine sediments above and below it. Rocks trapped in melting icebergs are dropped in offshore sediments. (Eurico Zimbres 2007, Creative Commons 2.5)